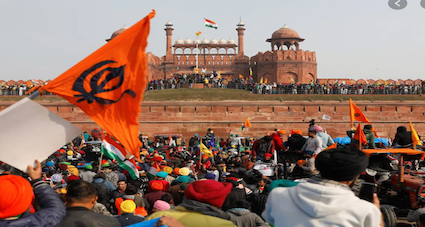 The Delhi Police, in their 3000-page charge sheet against the violence during the Kisan (farmer) tractor rally at Red Fort on Republic Day, mentioned that the protesters had a “pre-conceived and well-coordinated” plan to turn the historic monument into a “protest site”.

Money was a big factor too as an accused named Iqbal Singh had confessed during the interrogation that he was promised a cash reward by Sikhs For Justice group if he succeeded in hoisting the Nishan Sahib flag hoisted on the ramparts of the Red Fort.

The police have cited an audio of conversation wherein the daughter of Iqbal Singh is allegedly conversing with one of his relatives and mentioning that they will be getting an amount of Rs 50 lakhs.

According to the charge sheet, the Delhi Police has named 16 people, including  Deep Sidhu Lakha Sidhana, Iqbal Singh, Maninder Moni, and Khempreet.

“We have filed around 3000 pages of chargesheet before the Duty Magistrate on May 18 at the Tis Hazari Court. We have arrested 16 persons and 13 of them are on bail. Accused identified as Jugraj Singh, who is alleged to have raised Nishan Sahib flag at the Red Fort on Republic Day, Khempreet Singh, who was seen carrying a spear in his hand and allegedly assaulting the police personnel on duty, and Maninder Singh Moni, who was seen in a video swinging two swords at Red Fort, are still lodged in jail,” a senior police officer said.

Delhi Police Police had lodged a case in the case at PS Kotwali under various IPC sections, including sedition, rioting, attempt to murder, dacoity, and violence. The case was later transferred to Crime Branch.

The police have further claimed that their investigations have revealed a sudden increase in the purchase of tractors, which shows that the purchase was solely taken to support the protest.

Further, police said the accused; Deep Sidhu acted as the main instigator who provoked the mob to indulge in the violence.

Meanwhile, the police also said they might file a supplementary charge sheet if they find additional evidence during their investigation in the case.

Several walls and faculty rooms at Jawaharlal Nehru University (JNU) in Delhi were defaced with slogans against the Brahmin and the Baniya community yesterday...

NATO snub: Ukraine should focus on sovereignty and not on joining us