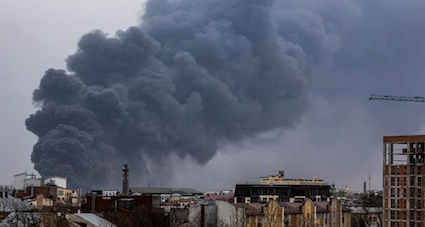 Russia’s army has claimed that it has taken over a large Ukrainian weapons depot in the Kharkiv region.

A top Russian commander has revealed that Russian forces have been aiming to gain absolute control of southern Ukraine as well as the eastern Donbas. According to a CBS News report, as a part of the “second stage” of its offensives toward Ukraine, Russia’s military announced on Friday that it intends to conquer all of Donbas and southern Ukraine, and as far south as Moldova.

It is worth noting that the parts of Donbas are controlled by separatist groups, Donetsk People’s Republic and the Luhansk People’s Republic. Further, the declaration establishes significantly broader military objectives than Moscow had previously acknowledged.

Putin on Thursday ordered Russian troops not to storm a giant Mariupol steel mill where an estimated 2,000 Ukrainians remain holed up but to seal it off — in an apparent bid to free up his troops for the broader campaign in the east.

As the Moscow-Kyiv war enters day 59, Russia on Friday relocated a dozen of elite military units from the strategic port city of Mariupol towards eastern Ukraine, the industrial heartland of the country. The shift comes after Russia earlier this week claimed to have “cleared out” the besieged city of defenders and initiated what it calls the “second phase” of its invasion of Ukraine.

However, thousands of Ukrainian forces are said to be sheltering in Azovstal metallurgical plant in Mariupol along with civilians who are awaiting a humanitarian corridor for evacuation.

Shortly after Russia claimed control over the port city on Thursday, Russian state TV showed the pro-Russian Donetsk flag hoisted at the highest point in the city.

Russian forces pummeled the Azovstal plant holding 2,000 Ukrainian defenders. “Every day they drop several bombs on Azovstal,” said Petro Andryushchenko, an adviser to Mariupol’s mayor, as quoted by the Associated Press. “Fighting, shelling, bombing do not stop,” he added.

Mariupol is one of the worst-hit cities in Ukraine. It is a prime target of Russia due to its geographical location, sharing land and water border with Crimea through the Sea of Azov and ultimately the economic zone of the Black Sea.

It’s also said to be the stronghold of neoNazis in the form of Azov Battalion which is incorporated into Ukrainian army.