The saga of Kumaraswamy keeps Congress out of ‘mahagathbandhan’ 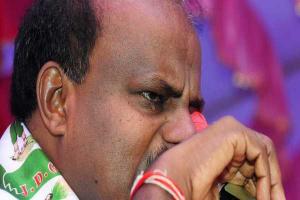 Most prospective allies dread Congress as a partner in the approaching 2019 General Elections. They know of the mauling of HD Kumaraswamy (JDS) by its partner Congress in Karnataka even though the faithful Lutyens’ Media are doing their best to keep the sensational news under the wraps.

None of the English mainstream media has taken note of a News 18 story which mentions Kumaraswamy almost “cried” while listing the ills of partner Congress recently. Only if this news was in “The Wire” or even little-known “Caravan” magazine, the English MSM would’ve fallen over each other in reserving the columns.

The report says Kumaraswamy has dropped enough hint that his Karnataka government may not last beyond the coming Lok Sabha elections.

Addressing his party’s MLAs and MLCs, Kumaraswamy was virtually in tears, alleging that he was functioning like a clerk and not like a chief minister because Congress is interfering in everything.

“He is sad. He almost cried. Told us that the Congress was behaving like a big brother. Forcing him to sign all kinds of orders. They forced him to expand the Cabinet and even appointed chairpersons to government run boards and corporations without his approval. He feels that it is getting tougher with each passing day,” said an MLA who was present in the meeting.

Kumaraswamy apparently told his partymen that Congress leaders always expect him to behave like their subordinate. The JDS supremo and former Prime Minister HD Deve Gowda was present in the meeting.

The JDS is looking for 12 Lok Sabha seats in the 2019 elections while Congress is offering them just six which has led to serious friction in recent weeks.

JDS and Congress bitterly fought against each other in the Karnataka assembly elections of last year but joined hands in an opportunistic manner to keep BJP out of power. BJP had won 104 out of the 228 seats but Congress (80) and JDS (37) buried their hostility to form the government with Kumaraswamy as chief minister.

But no sooner had Kumaraswamy assumed his post, Congress began humiliating him in no uncertain manner. The English mainstream media meanwhile kept admonishing Kumaraswamy instead of questioning Congress on their arrogance.

All big players have watched the unfolding saga of betrayal in Karnataka and are hedging their bets against an alliance with the Congress.

Samajwadi Party (SP) and Bahujan Samajwadi Party (BSP) have decided to go together in the critical Uttar Pradesh and have turned their back on the old national party, now creaking under its own sloth and arrogance.

Mamata Banerjee didn’t even deign to congratulate Congress after its win in three assembly elections recently. She is carrying a personal hurt against Rahul Gandhi for ignoring her offer to contest the Tripura state assembly elections together. “I don’t know who advised him and influenced him,” Mamata had then said curtly.

Telangana chief minister K. Chandrashekhar Rao (KCR) is already firming up Federal Front which he plans to field in 2019 general elections. He is doing the rounds of the county, knocking at the doors of Odisha chief minister Naveen Patnaik and Delhi’s Arvind Kejriwal but apparently can’t stand Congress.

The arrogance of the Congress is sickening. Congress spokesperson Abhishek Sanghvi warns SP-BSP alliance that they ignore his party at their own risk in Uttar Pradesh. Congress leader Gaurav Gogoi chuckled at the “sleepless nights” of Mamata’s leaders in the wake of his party’s win in recent assembly elections.

There are cautionary voices within Congress, like the one of AK Antony, twice defence minister and thrice Kerala chief minister, who has openly stated that Congress is not strong enough to take on BJP in 2019 general elections. But the hubris of Congress knows no limits and it’s in-your-face arrogance is becoming difficult to ignore for the potential allies.