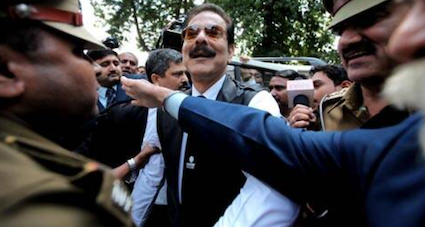 Sahara India’s agents and investors held a massive protest against Sahara Group owner Subrata Roy in Uttar Pradesh’s Lucknow on Saturday. In visuals accessed by Republic, thousands of investors and agents of Sahara India were seen in front of Ramabai Ambedkar Park in Gomti Nagar, raising slogans against Roy and demanding his arrest.

With national flags in their hands, protestors vowed to take out the Tricolor Yatra from Ambedkar Park to Subrata Roy’s house. The police administration including ADCP Shweta Srivastava was also present on the spot when the investors carried out the Tricolor yatra.

Around Rs 25,000 crore is pending to be returned to investors of the Sahara Group.

In 2012, the Supreme Court ruled that Sahara Group companies illegally raised over $3.5 billion from the public in violation of securities laws. Monies were raised in cash from millions, who could not avail banking facilities. When the case surfaced and SEBI undertook the investigation, it was unable to trace the investors. Subsequently, Subrata Roy was arrested in March 2014 and sent to jail. He has since 2016, been out on bail.

On 16 May 2022,  the Supreme Court stayed the Patna High Court order directing the Director General of Police (DGP), Bihar, to produce the Sahara Group chief before it in a case wherein it was alleged that some companies of the Group were still not returning money to the investors.

The apex court also stayed the separate order passed by the high court which had on February 11 directed to add Sahara Credit Cooperative Societies Limited and Roy as opposite parties to a bail petition pending before it and later, directed him to personally appear before it.

The top court is now expected to hear the plea in which it had stayed the direction of the Patna HC on July 13.

A bench of Justices AM Khanwilkar and JB Pardiwala passed the order on the Bihar government’s counsel’s request, seeking more time for the state to file a counter-affidavit.