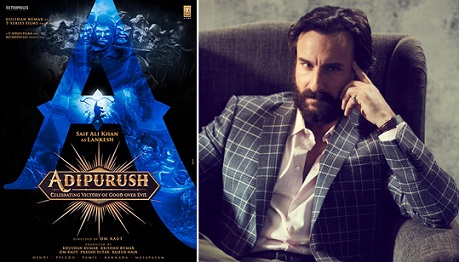 Saif Ali Khan seems to be completely unmindful if not deliberate in poking the most painful memories of Hindu psyche.

First was the renaming of his son as Taimur after one of history’s most murderous conqueror who once had over a lakh of innocent people killed in Delhi’s by-lanes in 1398.  It was said that city reeked of decomposing bodies of its citizens with their heads being erected like structures and the bodies left as food for the birds by Taimur’s soldiers.

Then Saif claimed that he was a history buff and he knew that there was no India before the British took over the land. And now he is justifying Ravana abducting Sita by stealth in forest.

Saif Ali Khan is playing the part of Lankesh (Ravana) in an upcoming movie Adipurush and this is how he described his character in an interview on Friday: “It’s interesting to play a demon king, less strictures in that. But we will make him humane, up the entertainment quotient, justify his abduction of Sita and the war with Ram as revenge for what was done to his sister Surpanakha by Lakshman, who cut off her nose,” he is quoted to have said.

Ravana is the most hated character in Hindu mythology. His abduction of Sita which led to Bhagwan Rama crossing the sea and nailing the demon king in his kingdom of Lanka is the most abiding of Hindu mythology not just in India but quite a few parts of southeast Asia. Sita, or Janki is referred to as “Mata” in Hindu mythology. She, along with Rama, is part of thousands of temples, not to say put on a pedestal in millions of households where families bow in front of her image daily. To say that “Ravana was justified in abducting Sita” can’t be a slip of tongue—especially from a history buff that Saif Ali Khan proclaims himself to be.

Saif’s wife, Kareena Kapoor, seems to go along with her husband’s apparent distortion of India, its history and culture. She wrote thus on Instagram along with a poster of the movie: “Presenting the most handsome devil in the history: My man Saif Ali Khan.” Handsome is somehow not how Ravana is perceived in Hindu mythology. Indeed, the man is said to have 10 heads whose killings in Dusshera every year, for thousands of years now, is part of memory of this land called Bharat.

Kirti Sanon is playing the role of Sita while Bhagwan Ram is played by Prabhas of “Bahubali” fame. It’s director Om Raut first earned her spurs in “Tanhaji” in which too Saif Ali Khan had a villainish role. The movie is being produced under T-series and is set to hit theatres in 2022.