Salahuddin’s sons is just a start: Some 300 heads could roll in J & K 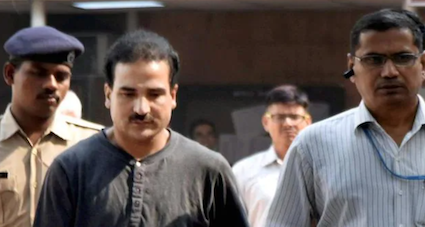 The Jammu and Kashmir government has dismissed two sons of Hizbul Mujahideen (HM) chief Syed Salahuddin for their involvement in terror-related activities. They were under the surveillance of the National Investigation Agency (NIA) for a long time and were found involved in terror funding, promoting separatism and harbouring terrorists. The duo, Syed Ahmad Shakeel and Shahid Yusuf, were among 11 employees that have been dismissed and their details have now been shared with the media now. Salahuddin’s sons were involved in hawala transactions, and Shakeel was arrested in 2018, for a case registered in 2011. Shahid was arrested in 2017 in the same case and have been in jail for a long time.

While one son was working as a doctor at the Sher-I-Kashmir Institute of Medical Sciences, the other was working at the Skill Development Department in the Valley.

The dismissals have been carried out under stringent punitive provisions of Article 311 of the Indian Constitution. These provisions allow the government summary dismissal of the employees without conducting any inquiry, or presenting any chargesheets to those facing the wrath of the law. Almost all the dismissals have been based on the direct involvement of these employees with proscribed organisations like Hizbul Mujahideen, Lashkar e Toiba (LeT) and Dukhtaran e Millat (DeM). In several cases, the employees used to work as Over Ground Workers (OGWs) spreading hatred and discontent against the government.

Various officials said that the number of such employees, dismissed summarily, is likely to go up substantially in the coming days. As many as 300 (or more) employees may be dismissed in this manner within the next few days, once the process of review of their cases is completed by the empowered committees. Some officials of the Home Department and those working with various intelligence agencies said that the MLAs, MLCs and even ministers were often a hindrance in initiating action against the guilty employees. With Lieutenant Governor Manoj Sinha at the helm of affairs, there is zero political interference in these cases and they are being expedited.

As per the official records, constable Abdul Rashid Shigan was involved in the killings of retired DySP Abdul Hamid Bhat, police inspector Shabir Ahmad and ASI Sukhpal Singh. He was also involved in carrying out an attack on National Conference (NC) leader Ali Mohammad Sagar. Shigan often carried out attacks by hiding behind a burqa, and at other times woman’s wig, and an attack on then SHO Batmaloo was also his handiwork. He was discharged from police training but got a reinstatement order from the court in 2002. This perhaps also points to how some court processes were subverted and used to help terrorists, or their sympathisers, working in various government departments.

Article 311 of the Constitution of India defines “Doctrine of Pleasure’’ and the punitive provisions of this article have been invoked to dismiss 11 government employees. All dismissals have been done by weighing in the evidence collected by the state police and the National Investigation Agency (NIA) against them, according to officials. They said that several other employees are also under scrutiny and in the coming days, more dismissals are likely.

Meanwhile, NIA has carried out raids in Srinagar as also south Kashmir. It arrested some people for their alleged terror links, and for their involvement in illegal activities. The NIA seized some records of Siraj ul Uloom at Dalal Mohalla in downtown Srinagar. (This is a developing story.)

Some other people arrested in the NIA raids were identified as Javaid Ahmad Mir (28), Umar Bhat, Ovais Ahmad Bhat (Lab Technician), Tannveer Ahmad Bhat (26), al and Zeeshan Ameen Malik (22), a chemist. All these arrests were made at Achabal in Janglat Mandi area of Anantnag district.

The following is the list of employees dismissed. Out of 11, the names of 10 dismissed employees are available.