Salman visits Shah Rukh after the arrest of latter’s son 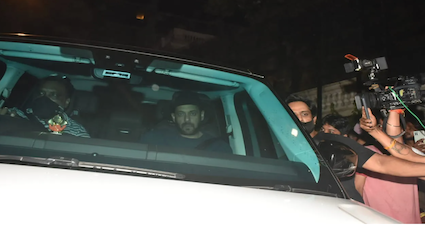 After the high-profile arrest of Shah Rukh Khan’s son Aryan Khan in a drugs case, fellow Bollywood star Salman Khan visited the former at his bungalow in Mumbai.

The Narcotics Control Bureau had arrested SRK’s son Aryan Khan after the drug bust on Cordelia Cruises’ Empress ship. Apart from Aryan, his close friends, Arbaaz Seth Merchantt and Munmun Dhamecha, were also arrested. All the three accused in the drug bust case have been remanded to NCB custody till October 4.

“Prima facie investigation conducted by the NCB reveals that there is incriminating material in the form of WhatsApp chats and so on that clearly shows the nexus with the arrested accused (Aryan Khan and two others) with suppliers and peddlers on a regular basis,” the NCB said in its remand note.

While Arbaaz Merchant is an actor and is often spotted partying with Aryan and sister Suhana, Munmun Dhamesha is a fashion model.

Aryan has been booked under sections 27 (punishment for consumption of any narcotic drug or psychotropic substance), 8C (produce, manufacture, possess, sell or purchase of drugs), and other relevant provisions of the Narcotics Drugs and Psychotropic Substances Act (NDPS).

Later in the evening, the memo of the arrest of Aryan Khan, which he has acknowledged, became public.