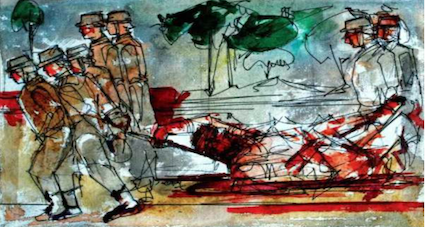 Indian history considers the 1857 revolt as the first uprising against the British. Despite ample evidence in the public domain, Indian historians have not cared to write a word about the Santhal revolt. You would be surprised to know that it was Tilka Manjhi and not Mangal Pandey who had led the first rebellion against the British way back in 1771. Even the “Hool Revolt” that Sido and Kanu led in 1855 precedes the famous 1857 revolt.

When moneylenders, landlords and British rulers tried to grab the land of the Tribals or made any attempt to tinker with the traditions and culture of the Tribals or usurp their water, forests or land, it met with a rebellion. This time too, choking under the pressure of practical serfdom due to the Mahajani system, and with none of their grievances given importance by the administration, the Santhals rose in revolt and demanded autonomy.

On 30th June 1855, around 40,000 tribal of 400 villages of Sahebganj district (Bhagalpur, Bihar) refused to pay land revenue to the British under the leadership of Sidho and Kanhu Murmu. Sidho Murmu declared, “It is time we pushed the British out.” He also gave the slogan “Karo ya Maro [do or die]” and “Angrezon Hamari Maati Chhodo [British, leave our soil].” The British immediately ordered the arrest of the four brothers. A policeman came to arrest the brothers but Santhal protestors beheaded him. This terrified the government officials in the Santhal Pargana.

When the British realized that the administration was incapable of dealing with the revolt, they called in the army and imposed martial law. They arrested thousands of Santhal tribals and used lathis against the protestors and fired shots at them. In the battle that followed, more than 20,000 Santhals, including Sidho, Kanhu, Chand, Bhairav and their sisters Phulo and Jhano, laid down their lives while defending their land, water and forests. Sidho and Kanhu were caught and hanged from a tree in public in Bhognadeeh village. The battle continued until the last Tribal was alive.

The British made sure that the last drop of revolutionary spirit was annihilated. Although the revolution was brutally suppressed, it marked a great change in colonial rule and policy.

“It was not war; they did not understand yielding. As long as their national drum beat, the whole party would stand, and allow themselves to be shot down. Their arrows often killed our men, and so we had to fire on them as long as they stood. When their drum ceased, they would move off a quarter of a mile; then their drums beat again, and they calmly stood till we came up and poured a few volleys into them. There was not a sepoy in the war who did not feel ashamed of himself.”

The Scottish historian William Wilson Hunter, who was also a member of the Indian Civil Service, in his book Annals of Rural Bengal, recorded the first-hand testimony, quoted above, of officers, who with the military might of the British Raj, put down the Santhal Rebellion (also known as the Santhal Hool).

Thus, the first rebels against the imperialist rulers in India came from primitive hill tribes. They took on the British rulers in the hills of Santhal Pargana, Bihar/Jharkhand. The most popular among them is Jabra (Jaurah) Pahadia, alias Tilka Manjhi. In 1778, along with chieftains of the hill Tribe, he drove the British out of the Ramgarh camp. In 1784, Jabra killed East India Company administrator Augustus Cleveland.

Later, the British sent a troop under the leadership of Ayarkut, which killed a large number of Tribals and arrested Jabra. It is said that they had him dragged all the way to Bhagalpur after tying him to four horses. Despite being dragged for miles, Jabra was still alive. Tribals talk about his body being soaked in blood and his blood-red eyes could still instil fear in the hearts of the British. On January 13th 1785, he was hanged from a huge banyan tree in Bhagalpur.

(This piece is taken from swetankspad.com with gratitude).