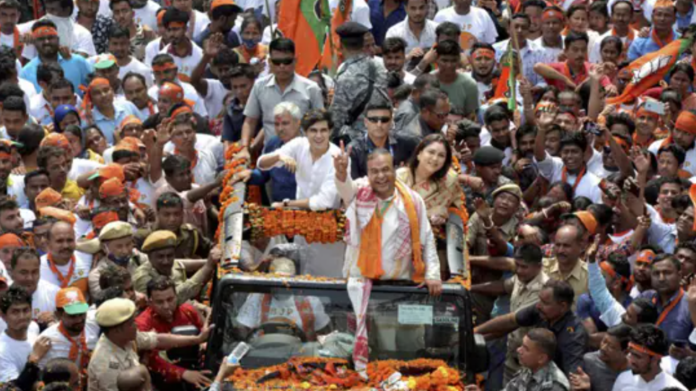 The Election Commission on Saturday relaxed its 48-hour campaigning ban on Himanta Biswa Sarma to 24 hours. With this, the Assam minister can now start campaigning for the Assam elections this evening. He will be campaigning today for West Gauhati AGP candidate Ramendra Narayan Kalita.

The election body wrote in a letter to Biswa Sarma today: “(…)the Commission. having considered your aforesaid unconditional apology and assurance/undertaking, in the above-mentioned representation, has decided to modify its Order dated April 2, 2021 and reduce the period of debarment from election campaign from 48 hours to 24 hours to the effect that permission may be granted for holding any public meetings, public processions. public rallies, roadshows. etc.. by the concerned district administration authorities, where you are expected or likely to participate.”

On Friday, EC barred Sarma from campaigning for 48 hours after the Congress filed a complaint against him alleging he threatened to put Bodoland Peoples’ Party (BPF) chief Hagrama Mohilary behind bars and issued a show-cause notice to him.

He was asked to explain his stance over the matter.  Earlier in the day, Sarma through his official Twitter handle informed that he had sent his reply to the notice issued.

Twelve Members of Parliament were suspended on the opening day of the winter session of Rajya Sabha on Monday by a motion moved by...