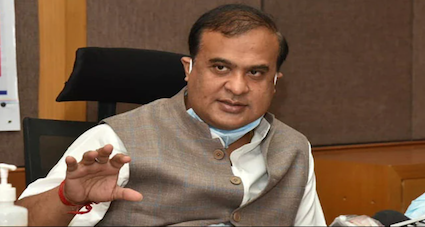 Assam is serious about population control and its chief minister Himanta Biswa Sarma is not mincing words.

The newly-appointed chief minister has de facto announced a population policy for the state where families with more than two children stand to lose State benefits, not to say consideration for government jobs.

Not one to hold his words back, Sarma on Saturday urged the State’s Muslim community to adopt a decent family planning policy in order for the State to deal with increasing poverty and chronic social issues.

Further, Sarma said:  “We will gradually incorporate a two-child policy for availing govt benefits. You can consider this an announcement.”

As per the chief minister, the limit would be kept on the higher side, i.e. up to 4-5 children. Further, families of tea gardeners, Scheduled Castes and Scheduled Tribes will be exempted from the policy.

“There are some schemes for which we cannot impose the two-child policy, like availing free admission in schools and colleges, or houses under the Pradhan Mantri Awaas Yojana. But, in case of some schemes, say if a housing scheme is launched by the state government, the two-child norm can be introduced. Slowly in later stages, the population norm will come in every state government scheme,” he added.

In 2019, the Assam cabinet had decided to bar people with more than two children from having government jobs in the State after January 1, 2021. Two years before, in 2017, the Assam Legislative Assembly had passed a resolution adopting the “Population and Women Empowerment Policy of Assam.” This included the proposal to bar anyone with more than two children from contesting municipal and panchayat elections, getting government jobs and other benefits.

As expected, this hasn’t gone down with the Muslim leaders of the State. Aminul Islam, a MLA of AIUDF, said: “What Chief Minister Himanta Biswa Sarma has said it clearly shows that he has targeted a single community, he targeted the Muslim immigrants. The Muslim migrants didn’t oppose the population policy adopted by the Assam government. Everyone thinks there should be birth control. But Himanta Biswa Sarma’s statement is a politically motivated statement.”

The chief of AIUDF, Badruddin Ajmal, had said in 2019 that the Muslim community would not listen and keep producing children.

Sarma himself has five siblings but he said there is no point in talking about what our parents did in the 1970s. He even appreciated Ajmal, stating that he had supported women’s education which has a correlation with population control.

On June 10, Sarma had spoken about recent evictions in three districts and urged the minority community to adopt “decent family planning policy” for population control to reduce poverty, which leads to shrinking of living space and consequent land encroachment.