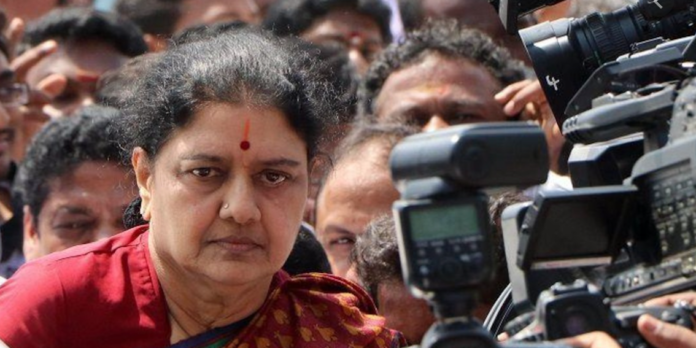 How will Sasikala’s return to Tamil Nadu politics impact the political scenario in the poll-bound state? Often called Chinamma (Chhotti Amma), will she be able to claim the legacy of late Amma, Jayalalithaa? It is not without a reason that Chief Minister Palaniswamy calls his AIADMK government “the Amma’s government” and his deputy O Panirselvam readily nods in agreement.

They both know clearly that the late Amma still rules the heads and hearts of a very large section of Tamils. This was also the reason Sasikala called herself a “slave of the Tamils”, whom she would like to control

There is no chance of EPS and OPS, the CM and DyCM, handing over power to Sasikala’s nominee any day soon. That much is crystal clear from the way they expelled seven party members who were found to be hobnobbing with Sasikala, including the man who gave his car to Sasikala so that she could travel from Bengaluru to Chennai!

With the AIDMK flag fluttering on the bonnet, she traversed the entire route in close to 23 hours! The crowds that greeted her on the route were tumultuous, chanting “Chinamma, Chinamma” at many places. If that alone were a barometer of Sasikala’s future, she has enough support among masses. Politics is a bit more complex than that and the crowds can be easily explained away as just being curious. Curious to know about what she plans to do, what promises she makes and so on.

At least on the first day of her public appearances in Chennai after a long time, the optics she evoked were perfect. Her going to MGR’s place and garlanding the late leader’s statue was enough to send AIADMK supporters in raptures. That she was denied an opportunity to visit Jaya’s samadhi by the ruling party in the name of “maintenance” can only mean a brief respite.

The day the place is open again, Sasikala is sure to visit there to pay her respects. Some dramatic gestures, and words, can be expected then. That day too would be another day of mobilisation of masses. An opportunity for Sasikala to hog the limelight.

Sasikala, virtually number two in AIADMK once, second only to Jaya, has too many people like OPS and EPS wanting to cut her down to size. At one time, Sasikala, OPS, EPS and others were on the same side but no longer so. Their falling out did not affect ruling AIADMK much as Sasikala served her four-year jail sentence. Her coming out of jail and taking on them can have serious consequences for the party. She can be a factor responsible for the journey of AIADMK from treasury to opposition benches.

It seems the person happiest in Tamil Nadu at this juncture may be M K Stalin, DMK leader who aspires to be the next CM. Perhaps his party, the DMK, has most to gain due to Sasikala’s challenge to OPS and EPS. Her public appearances in the coming days can sow the seeds of confusion among AIADMK supporters. They can be confused as to which one of them is Jaya’s real heir.

Her nephew TTV Dhinakaran, MLA, represents Anna Munetra Makkal Kadagam (AMMK) in the legislative assembly today. He is the person closest to Sasikala politically now and what happens next may become clear to us once they open their cards.  Her campaigning for AMMK could oust OPS-led AIADMK from power.

Superstar Rajinikanth’s short lived flirtation with politics had created a flutter in Tamil Nadu earlier. That potential stirring is not there as it has now become clear that Rajni is keeping off from direct participation in politics. Much in the same way, Chinamma may just prove to be no more than a flash in the pan.

A shrewd (shadow) politician that she is, Sasikala may set herself a target of ousting OPS first, by a combination of action and inaction. A new CM may suit her more than the one currently in saddle. But will she be able to emerge from the shadows and claim Jaya’s legacy is a question nobody seems to have an answer to.

As of now, Sasikala has isolated herself as she is recovering from Covid-19. Her company is her co-convict and sister-in-law J Illavarasi in a house on Habibullah Road in T Nagar, Chennai.