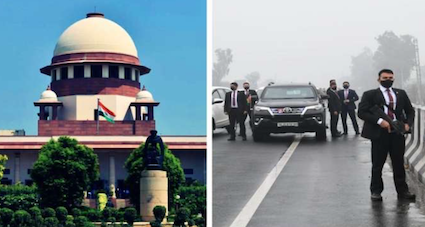 The Supreme Court today asked the Channi government in Punjab to hold its probe in relation to the security-breach-horror which happened with prime minister Narendra Modi’s visit to the State on January 5.

Among the many points which Supreme Court made today, the most startling is that the Punjab government can’t have its own probe; and even Centre has been asked to wait till Monday and cooperate with the  Registrar General of the Punjab and Haryana High Court who has been asked to keep all documents in its possession.

“Ask both the committees to hold their operations till Monday. This will not be in order but it’s understood”, Chief Justice of India NK Ramana told the Solicitor General of India and the Advocate General of Punjab.

The Bench appointed the Director General of Police, Chandigarh and an officer from the National Investigation Agency (NIA) as nodal officers to coordinate with the Registrar General.

This is significant as these officers are not associated with the Punjab Government or the Punjab cadre.

It must be noted that the involvement of the National Investigation Agency is significant and it indicates that the Supreme Court of India paid due care and attention to the scheme of the Special Protection Group Act, 1988 which highlights that the State Government under Section 14 of the said act is obligated to aid the SPG for the security of the Prime Minister of India.

The State of Punjab have appointed a two member committee to investigate, headed by ex-Justice Mehtab Singh Gill along with the Principal Secretary, Home Affairs and Justice, Government of Punjab.

The petitioner, senior advocate Maninder Singh, alleged that the retired judge heading the Punjab committee is unsuitable – “…the person appointed is a subject matter of a petition. A huge scam had happened in the state. This court had held that the Judge had targeted police officer who conducted investigation into his case”.

Maninder Singh, appearing for the petitioner-NGO, began his submissions by referring to Special Protection Group Act. He submitted that the security of the Prime Minister is done as per the SPG Act.

“Under this act, it’s not a state subject of law and order. It’s a national security issue. Also, the fact remains, in this trip, when PM Modi had to go to Ferozpur there was an impermissible stoppage of 20 minutes! All of us have to join heads together, this can’t happen again”, Singh submitted.

A Bench comprising the Chief Justice of India NV Ramana, Justice Surya Kant and Justice Hima Kohli was hearing a petition filed by the NGO “Lawyers Voice” which sought a court-monitored probe into the security lapse which happened when Prime Minister was travelling by road from Bathinda to National Martyrs Memorial in Hussainiwala.The PM’s convoy was stuck for 15-20 minutes on the flyover due to a road blockade by some protestors.