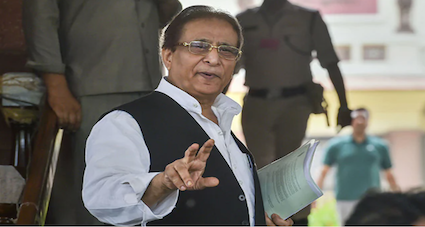 The Supreme Court on Thursday (May 19) granted interim bail to jailed Samajwadi Party leader Azam Khan in a cheating case. The top court granted liberty to Azam Khan to apply for regular bail before the concerned court within a period of two weeks, saying the interim bail will continue until the regular bail is decided by the competent court.

An apex court bench headed by Justice L Nageswara Rao invoked its special power under Article 142 of the Constitution to grant relief to Azam Khan in view of the peculiar facts of the case. It said the interim bail will operate till the court decides the application for regular bail.

“This is a fit case to exercise the powers under Article 142,” PTI quoted the bench, also comprising Justices B R Gavai and A S Bopanna, as saying.

The SP leader is presently lodged in Sitapur jail in connection with a number of cases, including that of land grabbing, against him in Rampur.