SC now makes itself heard: Govt-Farmer leaders to be part of a panel to resolve crisis 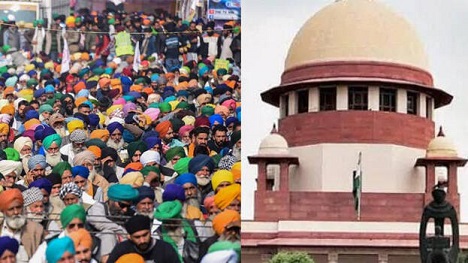 In a massive development, the Supreme Court on Wednesday ruled that a panel should be formed to solve the deadlock between the protesting farmers and Centre. The committee, monitored by the apex court, would include members of Kisan Unions as well as government intermediaries.

The Supreme Court was hearing a petition by law student Rishabh Sharma that had prayed for removal of farmers from border points.

Chief Justice of India SA Bobde said the farmers’ agitation needs to be resolved at the earliest lest it becomes a “national issue.” He called on the representatives of the two sides to sit together and prepare a list of tentative committee members from both the sides.

The apex court was informed by the Solicitor General Tushar Mehta that though the negotiations were on between the government and the farmer unions, the latter was insistent on “repeal (of laws) or nothing.”

CJI Bobde then stated that so far the negotiations have not brought any breakthrough and are “bound to fail again” as the farmers are adamant on repealing the farm laws 2020.

The CJI said that there was no legal issue in the demonstration, except for the hindrance to the freedom of movement of people.

The Bench comprising the CJI, Justice A S Bopanna and Justice V Ramasubramanian were hearing the petition which said that commuters were facing hardships due to road blockades. The petition also pointed out that large gatherings like this could lead to a spurt in cases of Covid-19.

It’s been over three weeks since farmers protests are being staged on the borders of Delhi NCR.

The matter has been listed for hearing on Thursday.