SC ruling against Walmart, Amazon is welcomed by Piyush Goyal 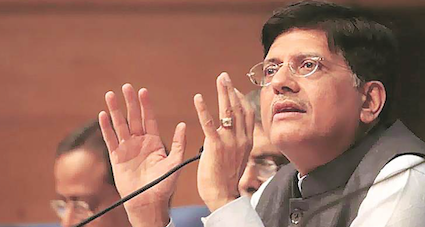 Union Minister of Commerce and Industry, Piyush Goyal welcomed the Supreme Court order that has ruled that India’s competition regulator will proceed with antitrust investigations against e-commerce giants Amazon and Walmart-owned Flipkart.

“These companies used legal tactics to stall the investigation … I am happy to tell you that yesterday, on the day of the Quit India Movement, all the efforts of these companies failed,” Goyal said.

“The top court decided that CCI should probe the allegations of fraudulent, unfair trade practices that they engage in,” Goyal added.

The SC order came as a huge setback after it refused to halt the preliminary enquiry ordered by the Competition Commission of India against e-commerce giants Flipkart and Amazon.

The commission had last year started a joint probe on Amazon and Flipkart after an organization of local retailers alleged that the firms abused their dominance through deep discounts, exclusive tie-ups and by backing some vendors.

He said they were initially allowed in the country just to serve as an agency between two business entities in the country, but it was found they “continuously used various legal tactics” and had disturbed the balance of competition in the market, hurting the small businesses.

Not only he welcomed the move by the Supreme court but also informed the parliament how the government is also continuously taking strict measures to avoid this.

Speaking about the upcoming changes in the Consumer Protection (E-Commerce) Rules, 2020, the minister informed the House that the government is fixing liability, “primary on sellers and secondary on e-commerce platforms”.

“There will be a grievance cell and every e-commerce company will have to keep a compliance officer responsible for consumer concern redressal, just how my colleague Ravi Shankar Prasad made it mandatory for IT companies, so that no one can escape after causing grievances to consumers,” he added.