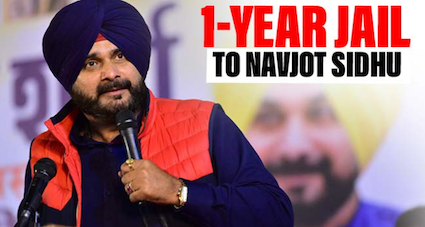 Congress leader and former Indian opener Navjot Singh Sidhu was sentenced to one year of imprisonment for a 1987 road rage case.

The apex court overturned its 2018 judgement reducing the punishment for Sidhu in the case, after a review petition was filed by the family of Gurnam Singh, the victim who had died in the incident in 1988.

In 2018, a Supreme Court bench of Justice J Chelameshwar (retired) and Justice SK Kaul had ruled that the offence of Sidhu didn’t amount to culpable homicide not amounting to murder, and had let him go with just a fine of Rs 1,000, reducing the sentence from 3 years imprisonment imposed by the High Court.

Accepting the review petition by the family of Gurnam Singh, a Supreme Court bench of Justices A. M. Khanwilkar and Sanjay Kishan Kaul has now sent Sidhu to jail for one year. The bench said, “We have allowed review application on the issue of sentence. In addition to fine imposed, we impose a sentence of imprisonment of one year to be undergone by respondent 1”.

The court had reserved its verdict in the case in March this year.

Saying that Sidhu had knowingly caused the death, the bench said, “The material on record leads us to the only possible conclusion that we can reach that the first accused voluntarily caused hurt to Gurnam Singh punishable under Section 323 IPC”.

On December 27 1988, Sidhu and one of his friends had beaten Patiala resident Gurnam Singh for allegedly blocking his vehicle. While Gurnam Singh was taken to a hospital, he was declared dead. Sidhu and his friend Rupinder Singh Sandhu were booked in the case.

In 1999, the Patiala district and sessions court had acquitted them citing lack of evidence. The state govt had appealed against it, and the Punjab and Haryana High Court found them guilty in 2006, and had awarded three-year jail term. In 2007, the Supreme Court had stayed the conviction on Sidhu’s appeal, and in 2018, the apex court had reduced the term to Rs 1000 fine, while Sandhu was acquitted.