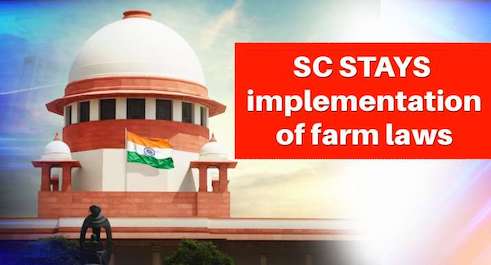 The Supreme Court has stayed thee farm laws until further orders and formed a four-member committee to resolve the lingering protests by farmers at the gate of the Capital.

It would be interesting how the farmers’ union respond to the formation of committee as they have all along wanted a repeal and nothing but repeal of the laws. On Tuesday, the four top lawyers representing the farmers’ group—Prashant Bhushan, Colin Gonsalves, Dushyant Dave, HS Phoolka— failed to appear before the Supreme Court though they had done so a day earlier on Monday.

The three-member bench comprised of the CJI, Justices AS Bopanna ad V Ramasubramania.

Petitioner, advocate ML Sharma though did appear and informed the Apex Court that farmers have rejected the notion of a committee to solve the gnawing issue. Aptly, the Chief Justice of India SA Bobde observed that lawyers should have faith in the judicial process. Senior counsel Harish Salve too reiterated on the same lines during the course of the hearing.

While ruling, CJI Bobde said: “We don’t want to hear the arguments that farmers will not go to the committee…if you (farmers) want to agitate indefinitely, you can do so.

“We are concerned about the validity of the laws and also about protecting life and property of citizens affected by protests. We are trying to solve the problem in accordance with the powers we have. One of the powers we have is to suspend the legislation and make a committee.”

On Monday, the Centre had moved the Supreme Court seeking an injunction against the proposed tractor rally on Republic Day, January 26. The Centre had said its security agencies have informed that a small group of protesting individuals or organisations have a tractor rally in mind.

Responding to SC orders, farmer leader Rakesh Tikait said the tractor rally would happen as scheduled. “We are not satisfied with staying the implementation of laws…We will discuss and decide on presenting ourselves in front of the committee…The protest will continue and we are even preparing for coolers to sit here till summers.”

“We want to solve the problem…we don’t want to hear an argument that someone will not go to the committee…members of the (advocates) bar are expected to show some loyalty to the judicial process. This is not politics. This is the judiciary,” the CJI said.

The attorney general KK Venugopal and solicitor general Tushar Mehta have welcomed the Supreme Court’s plan to set up a committee.

“Yesterday Dave (farmers’ lawyer) said no tractor rally on January 26. But today the unions say they will go ahead. We have filed an application seeking to retrain the unions from taking out the rally,” the AG said.

As for petitioner for the farmers, Advocate ML Sharma saying the farmers wanted to hold discussion with Prime Minister Narendra Modi, the CJI shot back: “We cannot ask the prime minister to go. He is not a party here.”

CJI said: “Mr Sharma, we will protect farmers land. We will pass an interim order saying that no farmers land can be sold for contract farming.”

Counsel Harish Salve said: “There is also apprehension that MSP will be done away with, APMC will be dismantled…all these are misleading.”