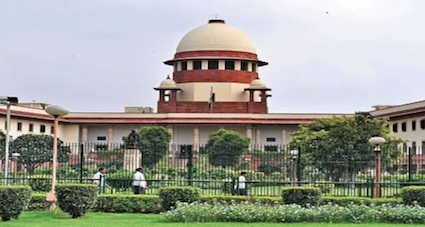 The Supreme Court was “surprised” at the Delhi High Court discussing UAPA (Unlawful Activities Prevention Act) at the length they did even as they didn’t interfere with the latter granting bail to three Delhi riots accused activists.

The Supreme Court would hear the matter next month as it issued notices to the activists and stressed that the Delhi High Court order, meanwhile, could not be used as a precedent for other cases.

Listening to a SLP from Delhi Police, the Supreme Court said on Friday: ”The release of respondents (accused) will not be interfered with at this stage. It will be subject to the final order… What is troubling us is that 100 pages have been written by Delhi HC in bail order discussing entire UAPA,”

“ (It was) something very surprising, we agree. There are many questions that arise. The issue is important and can have pan-India ramifications. We would like to issue notice and hear the other side.”

The Delhi High Court stuck to its order to grant bail to three activists—Natasha Narwal, Devangana Kalita, Asif Iqbal Tanha—who were accused of conspiracy over the Delhi riots which left 53 dead and over 200 injured. The three activists were charged under the UAPA.

Delhi Police had used very harsh words against the Delhi High Court on it granting bail to the three activists. Delhi Police said the High Court had “conducted a mini-trial…and recorded perverse findings which are contrary to the record.”

In granting the bail, the Delhi High Court had said that “dissent” is not “terrorism” and that in “their anxiety to suppress the dissent”, the Government has “blurred this line.”

Delhi Police accused the Delhi High Court of “discarding the evidences which clearly made out a sinister plot of mass-scale riots being hatched by the respondent along with other co-conspirators.”

At today’s hearing Delhi Police asked the Supreme Court to “stay the (High Court) order because (it) virtually records the acquittal of the accused” and others would seek bail using this as precedent.

“53 died and many were police officers… 700 were injured. The court says riots were controlled so UAPA is not applicable… How can the intensity of the offence be diluted?” Delhi Police asked.

“(Delhi) High Court watered down UAPA (and) it had been turned upside down,” Delhi Police claimed.

On Thursday, the three student activists were granted bail on personal bonds of Rs 50,000 and had been asked to surrender their passports. While challenging the bail granted by Delhi HC, the police said that the orders were given “without any foundation and appears to be based more on the social media narrative than the evidence gathered and elaborated in the charge sheet”.