Scindia and his “anti-Hindu” moment 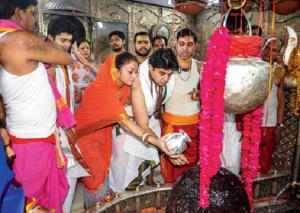 Congress leader Jyotiraditya Scindia has caused another “hindu-shame” moment for its his beleaguered party.

Scindia was headed for Rewa after leaving Khujraho during his campaign trail in Madhya Pradesh, election in which are due later this year.

Scindia was offered a “nariyal” by way of “Prasad” of Bhairontek Mandir of Panna by a devotee which he initially accepts but later throws out of his car-window.

The image was captured by an onlooker who promptly uploaded it on social media.

This story was first brought to notice on a Hindi news website.

Congress leaders have been insensitive to “Hindu” sentiments on more than occasion, mostly recently by Shashi Tharoor who claimed India could become a “Hindu Pakistan.” From disputing the existence of “Lord Rama” to fighting against the sanction to “Ram Janmabhoomi” in Supreme Court, Congress leaders keep showing their proclivity from time to time.

Most recently, an Urdu daily has claimed that Congress head Rahul Gandhi assured Muslim intellectuals recently that “Congress was a Muslim Party.”

Scindia, who apparently has hopes of becoming the Chief Minister of Madhya Pradesh after the assembly elections, has done his cause no good with his present action.