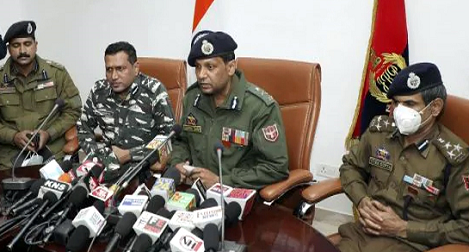 Terrorists may be keeping a close watch on the forthcoming District Development Council (DDC) elections with an eye on disrupting them. Mukesh Singh, IGP of Jammu region, has said that it is possible terrorists were planning a big attack. He was interacting with the media following an encounter at Ban toll post in Nagrota near Jammu.

Four terrorists were gunned down by the security forces and 11 AK-47 rifles, 3 pistols, 29 grenades and some other material was seized. In the encounter that lasted over three hours, terrorists had lobbed some grenades and resorted to heavy firing.

The IGP said such a seizure was unprecedented. “It is possible that they were targeting DDC election. We are investigating,” Singh told the media. He said that the driver of the truck in which the terrorists were travelling, had absconded.

The J&K police believe that the terrorists were possibly members of proscribed Jaish e Mohammad (JeM) organization. The security forces had some intelligence inputs about the movement of these terrorists. It is likely that this group may have infiltrated from Samba sector in a day or two.

Alert policemen had stopped the truck near the Ban toll plaza to check it early in the morning around 5 am. Just then, terrorists travelling in the truck jumped out and fired at the security forces. Both men of JKP and Centrally Reserve Police Force (CRPF) are permanently deployed at the toll plaza.

Additional troops, including armymen from nearby locations, were rushed to the encounter site. They surrounded the entire area and one policeman is reportedly injured in this incident.

The first phase of DDC elections is scheduled for November 28 and there are seven more phases later. In Kashmir, additional deployment of security personnel is going on to maintain law and order.

This terror incident is likely to create some anxiety among the political parties, as also their workers, participating in DDC polls. In all, there are 280 DDC seats up for grabs. Simultaneously, elections are also being held for vacant halqa and block level panchayati institutions.