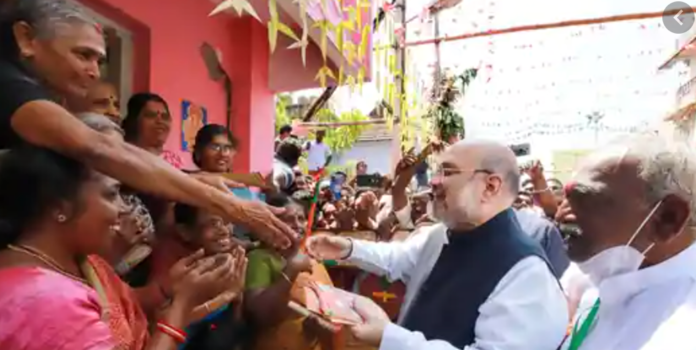 Union Home Minister Amit Shah reached Kanyakumari on Sunday to campaign for BJP MP Pon Radhakrishnan, who will be contesting for the April 6 bypoll there. After his visit to the Suchindram temple, Shah began his door-to-door campaign as part of BJP’s Vijay Sankalp Mahasampark Abhiyan.

“Today, we have started our door-to-door campaign by visiting 11 homes here. We appeal to all to ensure the win of NDA candidate Pon Radhakrishnan from Kankyakumari Lok Sabha seat in by-polls,” Shah said while visiting people’s homes. “I am confident that the AIADMK-BJP-PMK government will be formed in Tamil Nadu,” he added.

Shah took part in a massive roadshow from Hindu College which concluded at Veppamoodu Kamaraj Statue in Kanyakumari and addressed a Karyakarta Sabha of BJP at the Uduppi Hotel. After rallying in the city, the Home Minister will then leave for Thiruvananthapuram.

The by-polls in Kanyakumari will be conducted along with the Assembly election in Tamil Nadu on April 6. The seat fell vacant last year after Congress MP H Vasanthakumar’s death due to Covid-19.

This is Amit Shah’s second visit to Tamil Nadu in a week. Last Sunday, he visited Chennai and met chief minister Edappadi K Palaniswami and his deputy O Panneerselvam.

BJP is contesting Assembly elections in Tamil Nadu in alliance with incumbent All India Anna Dravida Munnetra Kazhagam (AIADMK). The AIADMK has allocated 20 assembly constituencies to the BJP for the upcoming elections along with the Kanyakumari Lok Sabha constituency.

The 234-seat Tamil Nadu Legislative Assembly will hold polls in a single phase on April 6 and the counting of votes will take place on May 2.