Shah claims Pro-Modi techies arrested for slogans: Where is ‘Freedom of Speech’ gang? 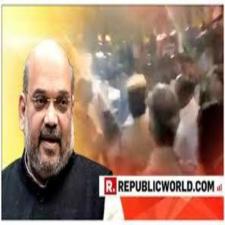 Most of you who only rely on your English mainstream newspapers wouldn’t have known that Rahul Gandhi was met with “Modi, Modi” chant from a crowd outside the venue when he had came for an interaction with entrepreneurs in Bengaluru on Monday.

Your newspaper would’ve blanked the news, and so would be their “hit-job” on the condemnatory tweet by BJP president Amit Shah that those raising pro-Modi slogans were detained by the police.

Shah tweeted thus: “Hugs for `tukde tukde gang’ and arrest of peaceful youth raising pro-Modi slogans? Where are the champions of free speech?”

The proof of pro-BJP sloganeers tackled by state police is in this video. The entire news report, as well as the video of pro-Modi slogans on Rahul Gandhi meet can be viewed too).

( Before we move on, I request you to view this video too of a previous Rahul Gandhi’s engagement in Bengaluru: You would be amused by the scorn of the students when Rahul Gandhi spewed venom on “swacchh bharat” and “make in India” campaign. In Mumbai, on another occasion, Rahul Gandhi was heckled with pro-Modi slogans by students of a local college.)

The bigger question of course is the duplicity and agenda of our Lutyens Media. The “freedom of speech” gang hits the street whenever they sense their moment. They came out in full-throated support when “Tukde Tukde gang” of Jawaharlal Nehru University (JNU) was put under sedition charge, voicing “freedom of speech” as the sacrosanct right of a citizen granted under the Constitution of India. Whenever a Saif Ali Khan names his son “Taimur”; a Naseeruddin Shah, Aamir Khan or Javed Akhtar are pulled up allegedly sectarian viewpoint, Lutyens Media is quick to defend their “freedom of speech” right. Rajdeep Sardesai went to the extent of saying he too is “anti-national” in support of “Freedom of Speech” of tukde tukde gang. But all of this vanishes when innocent students/techies booked are chanting pro-BJP slogans. The partisanship of police in a Congress-JD(S) ruled state is never viewed as a misuse of state’s powers.