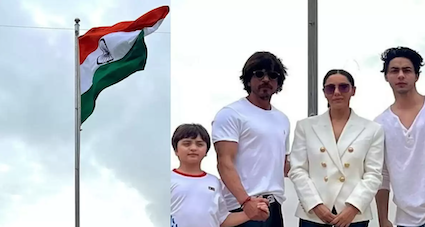 Superstar Shah Rukh Khan and his family hoisted the national flag at their residence Mannat to join the Har Ghar Tiranga campaign.

On Sunday evening, SRK’s wife and interior designer Gauri Khan took to Instagram and shared a glimpse of their pre-Independence Day celebrations.

Shah Rukh and Gauri are seen standing with their sons Aryan and AbRam in front of the Indian flag. To mark the Independence Day eve, they all chose to twin in white outfits.

“Love you all,” a social media user commented.

The idea behind the ‘Har Ghar Tiranga’ campaign is to invoke the feeling of patriotism in the hearts of the people and promote awareness about the Tricolour.

Meanwhile, on the work front, Shah Rukh is all set to return to the silver screen after 4 years with ‘Pathaan’, which also stars Deepika Padukone and John Abraham. The film is scheduled to release on January 25, 2023.

He also has Atlee’s Jawan with Nayanthara and Rajkumar Hirani’s ‘Dunki’ with Taapsee Pannu in his kitty. Recently, he was seen in a cameo in Aamir Khan’s ‘Laal Singh Chaddha’ and R Madhavan’s ‘Rocketry: The Nambi Effect’.

Earlier, Indian citizens were not allowed to hoist the National Flag except on selected occasions. This changed after a decade-long legal battle by industrialist Naveen Jindal culminated in the landmark Supreme Court judgement of January 23, 2004, that declared that the right to fly the National Flag freely with respect and dignity is a fundamental right of an Indian citizen within the meaning of Article 19(1) (a) of the Constitution of India.

Lauding the Centre and PM Modi for the Har Ghar Tiranga Campaign, Naveen Jindal has urged every Indian to make ‘Har Din Tiranga’ their motto. Notably, Prime Minister Narendra Modi had urged citizens of the country to use ‘Tiranga’ as their profile picture on social media accounts between August 2 and August 15.