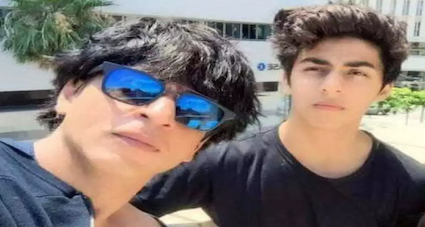 Bollywood star Shah Rukh Khan’s son Aryan is reported to have been detained in a raid by the Narcotics Control Bureau (NCB) on a rave party, said to being held onboard a cruise ship.

In an Indian Express report, Aryan Khan’s phone has been seized and being scanned by the authorities. He is neither booked nor charged so far.

It’s learnt that a high-profile party was organized onboard the Cordelia Cruises’ Empress ship. On a tip-off, the NCB officials boarded the cruise ship after disguising themselves as passengers.

Once the ship sailed off the coast of Mumbai, the rave party began and several passengers began consuming illicit drugs. The NCB officials swung into action and detained 7-8 individuals consuming drugs. The NCB is learnt to have recovered banned drugs such as hashish, cocaine and MDMA.

The rave party was organized between October 2-3 night.

Dubbed as a ‘musician voyage’, about 100 tickets were sold for the party. Other passes were distributed by the event organisers. The event was organised by Fashion TV India and a company from Delhi named Namascray Experience. The price of a single ticket to the event is estimated to be ₹80,000. The ship was bound to Goa from Mumbai.

In an Instagram post on Saturday, Namascray Experience said, “All ‘Boarding Passes’ will be issued by 2PM IST today. Guests who haven’t received their ‘Boarding Pass’ on email can come at 4.30 PM IST to the ‘Green Gate’ and manually Check-In today. Please let your friends know if they haven’t received the email. Sorry for the inconvenience caused.”

ANI also reported, “Three women, all residents of Delhi, have been brought to Narcotics Control Bureau (NCB) office in Mumbai for questioning in connection with the raid on a rave party at a cruise off the Mumbai coast yesterday.”

As per reports, daughters of some prominent businessmen were amongst those girls.

The NCB officials searched several rooms, and the operation took 7 hours to conclude. Those detained by the agency may be booked under the Narcotic Drugs and Psychotropic Substances (NDPS) Act. The accused are likely to be produced before a court today.