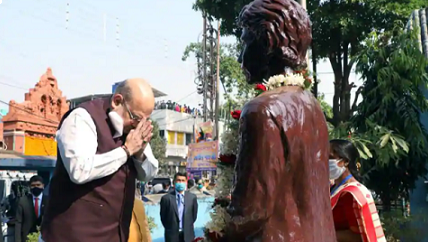 Union home minister Amit Shah, during his Bengal visit, went to pay homage to revolutionary hero Khudiram Bose in his village in Paschim Midnapore and felicitated the martyr’s family.

Shah expressed his gratitude for having the good fortune of visiting the village of one of India’s greatest revolutionary hero.

Bose was only 20 when he was sentenced to death for his role in the Muzaffarpur Conspiracy Case in 1908. He was one of India’s youngest martyr in the struggle for India’s independence.

Khudiram Bose’s family was overwhelmed by Shah’s visit. Gopal Das, a member of the family, said they didn’t receive any respect by previous governments, including from. the ruling Trinamool Congress.

BJP has given us some bit of reverence. No previous government has ever afforded us such regard. Not even Trinamool Congress,” says Gopal Basu, a family member of Khudiram Bose https://t.co/gxuxbRtwQM pic.twitter.com/S27RKFdIgy

Das said no development work had been carried out in Bose’ village.