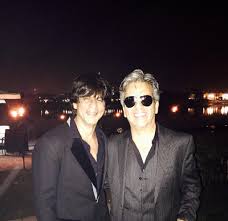 Bollywood became the centre of controversy after pictures of Shahrukh Khan and his wife Gauri Khan appeared with California based Kashmiri separatist Aziz Ashai, also known as Tony Ashai, who has been urging Kashmiri youth to fight against India.

A popular Srinagar-based activist who goes by the name Al iskandar @TheSkandar on Twitter posted a series of tweets claiming that Tony Ashai, also known as Aziz Ashai, has been a member of the terror group Jammu & Kashmir Liberation Front (JKLF) sponsored by ISI.

Quoting Ashai’s incendiary tweets, Al iskandar tweeted that he “himself is sitting in the cosy rooms of California and provoking Kashmiri youth to pick up stones and guns while his own son Bilal Ashai recently graduated from Los Angeles, University of Southern California with Masters degree.”

Tony Ashai, he said, has designed Shahrukh Khan’s Dubai buildings and Los Angeles apartments. The Bollywood superstar, according to the Srinagar activist, hired Ashai as an architect. Khan’s wife Gauri, he claimed is involved with Ashai in a lot of her projects.

Tony Ashai, aka Aziz Ashai, a JKLF member who has designed SRK’s Dubai buildings & Los Angeles Apartments. Ever since 2014, he has been trying to mask his love for Ashai because he knows that if this Genie is out of the box, it would do irreversible damage to his reputation. 2/n

Al iskandar said that “it’s a well-documented plan” for Tony Ashai to use his Bollywood influence. Shahrukh Khan, he said, is a patriotic person himself but is not aware about Tony Ashai’s plans.

Aziz Ashai (Tony Ashai) went to university in Buffalo, US, completely funded by JKLF, he claimed adding that there was a JKLF meeting which happened after his graduation in Italy. Moreover his first business, Ashai Design was also funded by JKLF, he tweeted.

“$450k came from a shell company in Birmingham in autumn of 1992. Moreover, his son (Bilal Ashai) is a member of MSA which has links to The Muslim Brotherhood.”

Posting Ashai’s pictures with Pakistan Prime Minister Imran Khan, Al iskandar claimed that Ashai “is on payroll of ISI, who is in touch with many people in Jammu and Kashmir and other parts of the country.”

As the tweets went viral, many Twitter users dug out several pictures of Shahrukh, his wife and Tony on social media. Some users pulled out pictures of other stars like Anil Kapoor, Sonam Kapoor, Karan Johar and others with another anti-India activist based in the UK.

I think Mr @iamsrk should be investigated by #NIA for his Business link with #TonyAshai and #AneelMussarat the Pakistani ISI man and close confident of Imran Khan. #BollywoodPakISILink

Someone Please tag my tweet to Sharukh, I am blocked by him. pic.twitter.com/XXconE8XNo

Taking note of the barrage of tweets, Vice President of the BJP, Baijayant Panda, reacted saying, “Came across shocking threads documenting personal & business links of some Bollywood personalities with certain Pakistanis & NRIs with undeniable track record encouraging violence in J&K, who have verifiable links to ISI & Pak army. I urge patriotic Bollywoodies to renounce them.”