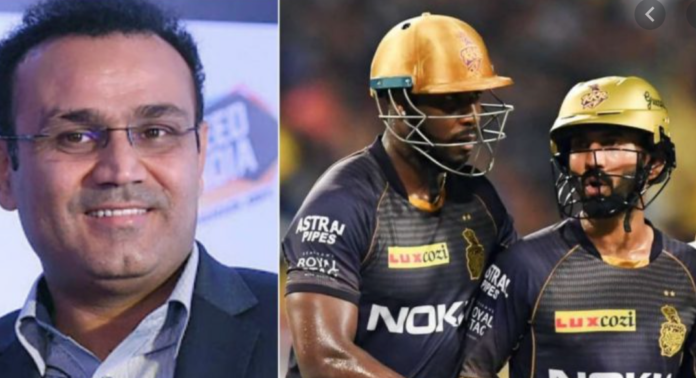 In Tuesday’s Indian Premier League (IPL) match, Kolkata Knight Riders (KKR) did all the hard work to restrict defending champions Mumbai Indians on 152 but messed up everything in the end.

Dominating the game for 35 overs with 122/3, KKR was well placed to win the game, with 31 runs required off 31 balls. However, they lost four wickets in the period as Mumbai Indians snatched a 10-run win from the jaw of defeat.

Following that, the former Indian batsman, Virender Sehwag lambasted the slow-go batting approach of experienced finishers Andre Russell and Dinesh Karthik. Slamming the KKR for the ‘shameful’ defeat, he questioned the intent of Russell and Karthik to finish the game.

“Eoin Morgan had given a statement that they will play that way (with positive intent) after the first game but it didn’t look like that when Andre Russell and Dinesh Karthik came in to bat. The way Russell and Karthik batted, it felt like they planned to take the game till the end and win it. But that didn’t happen. The batters who came before them be it Shakib Al Hasan, Eoin Morgan, Shubman Gill or Nitish Rana all of them played with positive intent,” Sehwag told Cricbuzz.

“Kolkata Knight Riders just lost the game which was almost won at one stage. When Russell came into bat, KKR needed 30 runs in 27-odd balls. Dinesh Karthik batted till the end but couldn’t win the game. That’s a shameful defeat,” he added further.

He also opined that there wasn’t much difference in runs per ball and “in such scenarios, teams prefer to end the game quickly to improve their net run rate. But KKR failed to do that and hampered their net-run rate.”

Rahul Chahar and Krunal Pandya did the bulk of the damage in the middle-overs for MI while Trent Boult sealed the win for his side with an excellent final over that saw him claim two wickets.

The KKR will next face Virat Kohli’s Royal Challengers Bangalore on Sunday in an afternoon game.