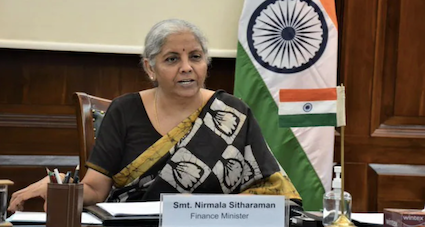 The price of petrol will come down by ₹ 9.5, while the diesel will be cheaper by ₹ 7 as Finance Minister Nirmala Sitharaman announced a sharp cut in central excise duty on fuel prices amid surging inflation.

The government says it will lose ₹ 1 lakh crore by taking the cut on central excise duties.

The Minister exhorted states to implement a similar cut and pass on the benefit to the common man.

“I wish to exhort all state governments, especially the states where reduction wasn’t done during the last round (November 2021), to also implement a similar cut and give relief to the common man,” appealed Sitharaman.

Also, the government will give ₹ 200 per cylinder subsidy to Ujjwala Yojana beneficiaries for 12 cylinders in a year to help ease some of the burden arising from cooking gas rates rising to record levels.

“This will help our mothers and sisters,” tweeted Sitharaman

The Finance Minister said the gas cylinder subsidy will have a “revenue implication of around ₹ 6,100 crore.”

April saw India’s wholesale and consumer prices accelerate at their fastest in years, prompting the central bank to hike interest rates at an unscheduled policy meeting this month.