Shastri opines Kohli should pull out of IPL: “Take a break” 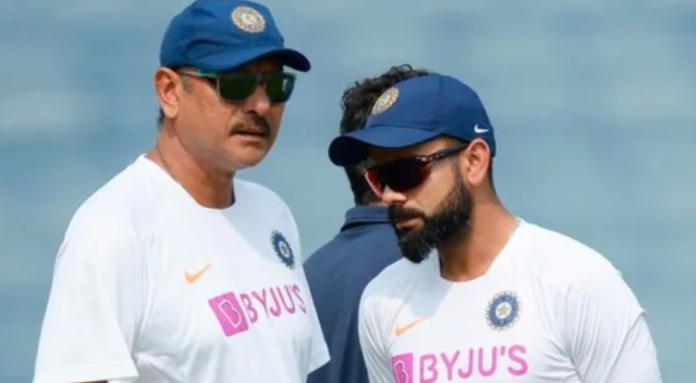 Virat Kohli’s search for form continues after he departed for another low score against Rajasthan Royals on Tuesday.

The lack of runs from Kohli has become a cause of concern for fans and experts, and former Team India coach Ravi Shastri believes that the cricketer needs to take a break before returning to the field.

Speaking to Jatin Sapru on his official Youtube channel, Ravi Shastri was of opinion that Virat Kohli takes up half-season of IPL 2022, asking the franchise to pay him half since some tough decisions are needed to be taken.

Shastri while commenting on Virat Kohli needing to take a break from IPL 2022 said, “I think a break is ideal for him because he has played non-stop cricket and he has captained the side across all formats. It will be wise of him to take a break. You know, sometimes you have to draw the balance. This year he is already into the tournament (IPL 2022), tomorrow if push comes to shove and you want to prolong your international career and make a mark there for 6-7 years, pull out of the IPL, for all you care,”

He added, “If that is the case, you have played for 14-15 years. Not only Virat, I’ll tell that to any other player. If you want to play and do well for India, you have to draw the line where you want to take that break and the ideal break would be off-season where India is not playing and the only time India does not play is the IPL. Sometimes, you need to do that or tell the franchise I’ll only play the half. Pay me half, as simple as that. Those tough calls need to come if you want to reach the zenith of your profession as an international player.”

The 33-year old Virat Kohli only has two 40+ scores from 8 matches in IPL 2022  season. The 48 runs scored against Mumbai Indians is by far Virat Kohli’s best score so far in the tournament.

From nine matches so far, Virat Kohli has just managed to score 128 runs at an average of just 16.