“She blew it”, says Smriti on Priyanka’s role in Congress’ debacle 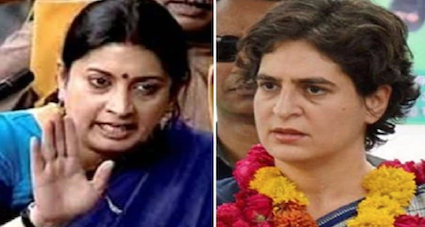 “She blew it,” was the terse remark of Union minister Smriti Irani after the Priyanka Gandhi-led Congress campaign in Uttar Pradesh came a cropper today.

Slamming Rahul Gandhi and his sister Priyanka, Irani said to news agency ANI:  “I don’t think he (Rahul Gandhi) has the strength to learn from his mistakes… In UP it was said that Priyanka will breathe new life into the party, instead, she blew it up.”

His sister Priyanka Gandhi Vadra, tasked four years ago to build up the party in Uttar Pradesh for this assembly election, said the party had been unable to convert “our hard work into votes.”

The Congress lost Punjab to the Aam Aadmi Party (AAP) and was defeated in the three states where it had hoped for a comeback or at least, a fighting chance – Goa, Uttarakhand and Manipur. In Uttar Pradesh, it appeared to be headed for a score worse than 2017 with just two seats out of 403.