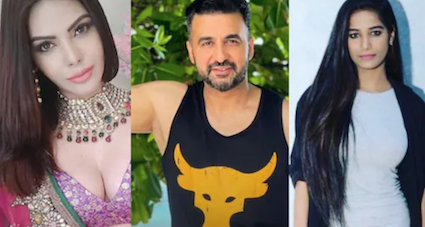 Bollywood actresses Sherlyn Chopra and Poonam Pandey have alleged that it was actress Shilpa Shetty’s husband and businessman Raj Kundra who was instrumental in getting them into the adult film industry.  They said he is mastermind of pornography business in India.

Raj Kundra was sent into police custody till July 23 in a case related to the creation and publication of pornographic content. He was arrested Monday night by the city police’s crime branch after being booked under sections 420 (cheating), 34 (common intention), 292 and 293 (related to obscene and indecent advertisements and displays) of IPC besides other sections of the IT Act and the Indecent Representation of Women (Prohibition) Act.

Poonam Pandey has a history with Raj Kundra, previously filing a case against him and his associates. She had a contract with his firm Armsprime Media and it managed her app, which is known for explicit photos and videos of Poonam.

However, after their association ended, Raj’s firm allegedly continued to use Poonam’s content. When Poonam found out, she filed a case against him in the Bombay High Court.

Reacting to Kundra’s arrest, Poonam Pandey issued a statement saying her heart goes to Shilpa Shetty and her kids. However, she also informed, “The only thing I’ll add is that I have filed a police complaint in 2019 against Raj Kundra and subsequently registered a case at the honourable high court of Bombay against him for fraud and theft. This matter is sub judice, hence I would prefer to limit my statements. Also, I have full faith in our police and the judicial process.”

Armsprime Media is in the business of developing apps for Indian models. Some of the prominent names in their client list include Sherlyn Chopra and Gehna Vashishta.

Besides her, Sherlyn Chopra has also named him and revealed that Sherlyn was paid Rs 30 lakh for each project, and so far, she had done 15-20 projects for Kundra.

Meanwhile, according to sources it has also been revealed that police has recorded the statements from several girls and they allegedly informed that they were blackmailed, threatened and even ‘forced’ to shoot pornographic films.