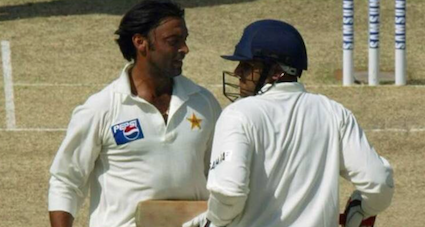 Shoaib used to “jerk his elbow” and “knew he was chucking too,” Sehwag made the big statement during the third episode of “Home of Heroes” on Sports 18.

The ex-India opener said while it was easy to pick the ball when someone like Brett Lee was bowling, because his “hand came down straight,” he could never guess with Shoaib Akhtar as he didn’t know where the hand and ball would come from.

“Shoaib knows he used to jerk his elbow; he knew he was chucking too. Why would ICC ban him otherwise?” Sehwag said to Sports18. “Brett Lee’s hand came down straight, so it was easy to pick the ball. But with Shoaib, you could never guess where the hand and the ball will come from.”

“I never feared facing Brett Lee, but with Shoaib, I could not trust what he would do if I hit him twice to the fence. Maybe a beamer or a toe-crushing yorker,” added the former swashbuckling opener.

Sehwag’s performances against Pakistan in the longest format is nothing short of astounding. The right-hander has played nine Tests against Pakistan, scoring a whopping 1,276 runs at an average of 91.14. He has a triple century, two double tons and a hundred against Pakistan.

“Sachin Tendulkar, Rahul Dravid, VVS Laxman, Sourav Ganguly all would score their centuries playing 150-200 balls. If I scored hundreds at the same rate, no one would remember me. I had to score faster than them to create my own identity,” said the former India cricketer.