Sibal manoeuvres for an Opp front, and hold your breath, minus Gandhis! 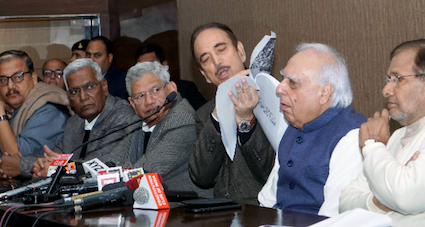 Senior Congress leader Kapil Sibal hosted a dinner, a day after his birthday, which sent his party leaders into a tizzy. While it was a small birthday party, later it turned into a rallying point for the opposition where the majority of leaders were seen critical of Congress’ leadership under the Gandhis.

According to NDTV, Several leaders stressed the Congress party resolving its “internal problems” and emerging as a party that could win over 100-150 seats across the country.

The source claimed that 20 of the Congress’ group of 23 dissenters (G-23) were also in attendance along with a few other senior party leaders. Senior G-23 leaders like Ghulam Nabi Azad, Anand Sharma, Manish Tewari, Shashi Tharoor, Vivek Tankha were among those who were present as was former Finance Minister P Chidambaram.

All were among the leaders who have been raising questions within the party about its future, demanding sweeping organizational changes – including an “active, visible leadership” and internal elections.

The message through the dinner was loud and clear — the long silence of G-23 should not be taken lightly. The group in its letter last year had complained that the party had lost touch with the people and is now a sinking ship, relegated to the margins of politics.

Naresh Gujral of the Akali Dal was highly critical of the Gandhis. He said unless Congress gets out of the clutches of the family, it will be very difficult to strengthen the party.

While no one in the Congress was willing to comment on the dinner development source revealed that “Sharad Pawar spoke about the Maha Vikas Aghadi Government in Maharashtra and suggested that a similar model can be replicated in other states to keep opposition unity intact.”

P Chidambaram, sharing a similar view, suggested that, Congress should come to an understanding with the regional parties in states to put up a united front against the BJP.