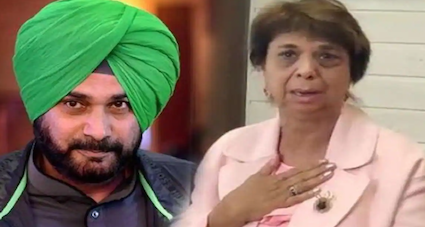 Punjab’s Congress state president Navjot Singh Sidhu’s sister has accused him of kicking their mother out of their house after the father’s death in 1986 to “quench his insatiable lust to usurp family property.”

Sumar Tur, who was in Chandigarh on Friday, wept inconsolably in a press conference, stating how their mother was “left to die unattended by her son, after the demise of her beloved husband.”

“We have endured harsh situations. My mother was in the hospital for four months. I have documentary evidence to back my claims,” Tur said.

Tur, who is an NRI and a US citizen, has called Sidhu a “cold-blooded person.” She said Sidhu even didn’t offer condolence after the tragic death of his eldest sister and other family members. She has urged the public to seek answers from Sidhu on these issues.

As for Turk, their nightmare began after her father Bhagwant Sidhu died in 1986. Shortly after the “bhog” ceremony, Sidhu had her and their mother out of their house; he was so rude they were forced to walk to the bus stand,” Tur has alleged.

Suman also accused Sidhu of lying in an interview to India Today in 1987 that her parents were divorced.

“Our mother had approached the court after Navjot Sidhu had claimed that there was a judicial separation between her and our father. He should furnish evidence to prove that our parents had separated,” Tur said.

Tur said that she want to meet Sidhu on January 20; he refused to meet her and didn’t open the door.

“I was compelled to address a press conference after attempts to contact Navjot Singh Sidhu failed. He has blocked me on his phone. His servants also do not open doors. I want justice for my mother,” Suman Tur said.

These damaging allegations have come against Sidhu who is eyeing chief ministership in the Punjab polls, due to be held on February 20.