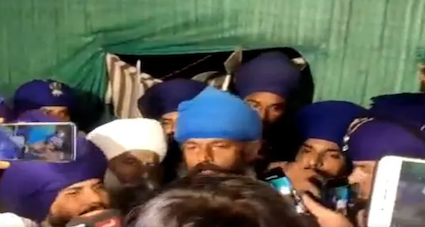 Accused Nihang Sarabjit Singh who was detained after the brutal lynching of a Dalit laborer Lakhbir Singh at a farmers’ protest site in Kundli near the Singhu border, has surrendered to the police, claiming responsibility for the brutal attack.

In a video clip on social media, Nihang Sarabjit could be heard saying that he’s ready to do things like these again if someone “dares to do crime like sacrilege again”. Also, when reported asked Sarabjit if he had any regret, he replied in the negative.

Singh was taken in custody by the police amid chants of ‘Jo Bole So Nihal’. He will be produced before a court today.

Jathedar Raja Raj Singh, the Nihang Tarna Dal’s chief said that claiming that he had “punished” the victim for “desecrating” the Guru Granth Sahib, the Sikh holy book.

On Friday, a man was lynched, his hands were chopped off and the body was suspended over a police barricade at a farmers’ protest site by Nihang Sikhs for allegedly committing blasphemy.