Some cheek! Illegal Rohingyas are protesting at detention in Jammu! 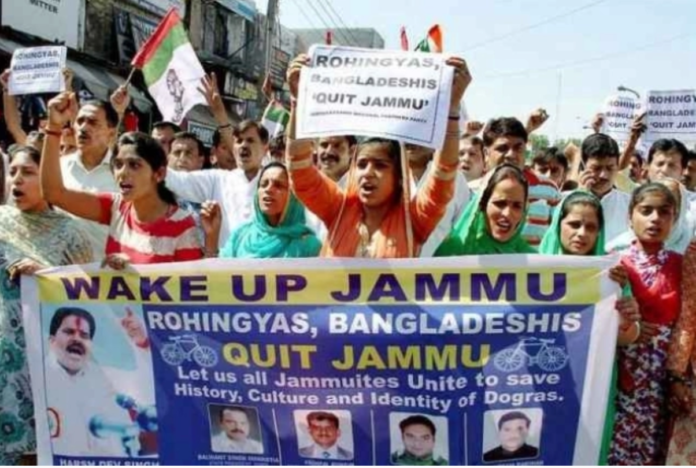 Something unique and peculiar is happening in Jammu right now as Rohingyas staying here illegally are protesting against detention of others from the same community who have no valid documents!

Over 150 Rohingyas were detained here a couple of days ago and shifted to Hiranagar sub jail which is now an official “holding centre” for these illegal migrants. In the next few days, more such centres are likely to be set up in Samba and Kathua districts.

In all, over 6,000 Rohingyas had moved to Jammu from Rakhine state of Myanmar and their presence here has caused some social tensions. If these Rohingyas were evenly distributed in Jammu as also Kashmir, perhaps things would have been less polarising communally. All these illegal Muslim migrants were settled in parts of Jammu, mainly outskirts of the city, from 2002 to 2014, during the PDP-Congress and NC-Congress coalition government era.

Incidentally, some Kashmiri NGOs work for their relief and rehabilitation here in Jammu. That makes it unique in that several people opposed to their presence here point out that the very same NGOs can take them away to Kashmir and save substantially on administrative expenses. Groups like Panthers Party and Ikjutt Jammu allege that they were settled here as part of conspiracy to change demographics.

It was a successful and silent policy followed by the PDP, Congress and the NC to settle Rohingyas in Jammu and provide them facilities. This was a red rag to the majority Hindu community here and seen as something being done deliberately to spite them. It also signified abject political disempowerment of the Hindus in J&K.

After the ascension to power of the BJP government at the Centre in May 2014, many Rohingyas started feeling the heat. The coming together of PDP and BJP

locally in J&K, however, disenchanted the people from the latter. Breaking of the PDP-BJP alliance in June 2018 and the dissolution of Article 35-A in August 2019 have served to queer the pitch for the Rohingyas in Jammu. Nothing much has happened on ground so far but it seems some action may start in right earnest against them.

On Sunday, an interesting way of protest was found by Rohingyas and those supporting them here. A few dozen Rohingyas gathered a few of their belongings and said they were starting a march to Myanmar! After walking a kilometre or so, they turned back to reach their shanties in Narwal and Bhatindi area. It seemed so ridiculous that the claim of march to Myanmar was floated. Has even one Rohingya family marched from Myanmar to Jammu? Absolutely not. They travelled by trains, trucks, buses and other means of transport. Helped in reaching Jammu by successive governments which were willing to provide them an ecosystem to thrive here.

These bleedheart governments have never ever extended a helping hand to any Indians in distress. Be it the thousands of victims of Kedarnath tragedy in Uttarakhand in 2013 or victims of Kerala floods. Of course, these governments readily bent over backwards to accommodate foreigner Rohingyas.

After jettisoning the baggage of ties with the PDP in June 2018, the local unit of the BJP has become more vocal about opposing the presence of Rohingyas in Jammu. With Ikjutt Jammu emerging as a voice for politically disempowered Hindus in Jammu, Rohingyas are unlikely to have it easy as they had it in the past though.

A serious problem being faced by the official machinery here is that hundreds of Rohingyas, enumerated earlier, have vanished over the years. Many have merged in local population and even got ID cards like Aadhar card, ration card etc made fraudulently. Will the BJP show guts, and also political acumen, to take up the issue with Myanmar officially and resolve it? That may be a question worth millions of votes!