Sonia Gandhi to remain at helm for now; Manmohan rises to her defence 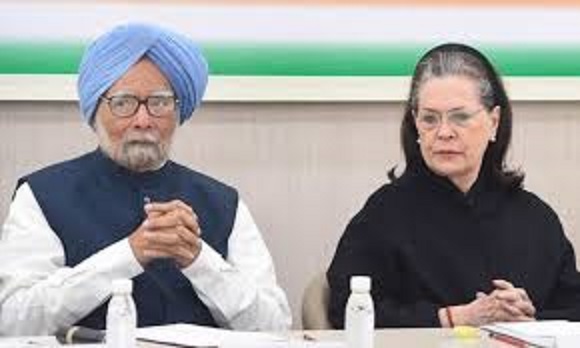 A marathon seven-hour virtual meeting of the Congress Working Committee (CWC) remained inconclusive. For the time being interim president Sonia Gandhi would remain in charge. A new chief though would be elected in next six months.

It’s clear that Sonia Gandhi would relinquish her post in next few months. The big question is who would take up her mantle. Both Rahul Gandhi and Priyanka Gandhi were reported to be unwilling to take up the responsibility. But six months is a long time in politics. A lot can change in the intervening period.

The meeting began with Sonia Gandhi offering to resign in the wake of the 23 top party leaders submitting a letter, asking for sweeping reforms within the Congress.

Sonia Gandhi had asked the CWC to begin the process of “transition” to relieve her from her duties. She was made the interim president after her party lost the 2019 General Elections and Rahul Gandhi resigned.

It’s learnt that Sonia Gandhi’s resignation was opposed by former prime minister Manmohan Singh as well as former defence minister AK Antony. Both these leaders were vehemently critical of the rebels’ letter which called for open elections at the national and state level within the Congress ranks.  The rebels had wanted an “active” and “visible” leadership, dismayed that the party high command had made no effort to analyse the reason for its defeat in the 2019 elections.

The meeting also believed to have seen an upset Rahul Gandhi accusing the rebels of “colluding” with the Bharatiya Janata Party (BJP). Kapil Sibal was moved enough by this accusation to take to “twitter” and slam Rahul Gandhi.

Rahul Gandhi, it is learnt, questioned the timing of the letter when the party was battling a crisis in Rajasthan and Sonia Gandhi was hospitalized. On his charge of “colluding with BJP”, Sibal, one of the signatories of the letter, hit back by saying he had never made a statement in favour of the BJP in the last three decades. Sibal later deleted his tweet, saying that Rahul Gandhi had personally cleared the misgivings, and said “he never said what was attributed to him.”

Another Congress stalwart, Ghulam Nabi Azad also clarified on his statement after Rahul’s alleged comments and saying he would quit all posts if the charge was proven that he was hand in gloves with the BJP.

“In the meeting, I said those people who are outside the CWC who are making these allegations should prove it and I will resign if they prove it. Rahul Gandhi at no point said the letter was sent at the behest of BJP,” Azad said.