Sonia has asked Baghel to step down as Chhattisgarh CM: Reports 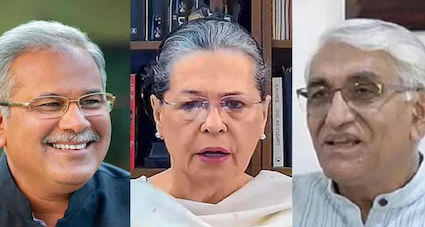 Amid the current political crises in Congress, party chief Sonia Gandhi has reportedly asked Chhattisgarh Chief Minister Bhupesh Baghel to step down as CM before November.

According to a media report,  Chhattisgarh health minister TS Singh Deo might take charge as Chief Minister in November.

The infighting among the Chhattisgarh Congress has been attributed to Deo’s demands that he should be given top chairs according to a ration formula. Deo has publicly acknowledged implementing the rotational CM policy.

“It is a big decision and the high command will take into account several factors. People are talking about the 2.5-2.5 years formula. Even 2.5 years have elapsed. This is not a new thing. This has been discussed in the public domain”, he had said.

Meanwhile, reacting to the current development, Bharatiya Janata Party MP Vijay Baghel slammed the Congress for creating a state of confusion among the people of Chhattisgarh. He said, “Crisis is always going on in Congress. They have always been confused and now they have turned desperate & tensed. The living example is Chhattisgarh. For the last four months, it has been going that Bhupesh Baghel will resign as 2.5 years of terms were fixed by Sonia Gandhi and Rahul Gandhi. Despite this, delay is going on for the past four months. Therefore, Bhupesh Baghel, Congress party and TS Deo who might be the new CM are in confusion. If Sonia Gandhi finally makes a decision on this then the confusing state of Chhattisgarh will end and people will express their opinions.”