Soros’ OSF has its bank accounts seized by Myanmar junta 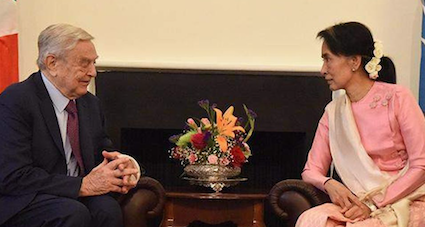 Myanmar might have lost many friends after its military junta took over the reins of the country but at least one count they would earn plaudits: They have seized the bank accounts of George Soros’ Open Society Foundation (OSF).

George Soros who is known to fund cultural revolutions in countries which are too independent and not to the liking of Left-Liberal globocracy now finds itself in the crosshairs of military junta of Myanmar. OSF has been accused of funding civil disobedience movements against the military rule.

As per the military regime, OSF has violated multiple financial guidelines. They are accused of funding the civilian government of the National League for Democracy (NLD), the political party of Aung San Suu Kyi who rose to power in 2016.

The military regime has arrested 11 staff members of OSF. It includes the top management, including the finance manger of OSF Myanmar already in detention. The allegations of impropriety includes failure to obtain approval from the Central Bank of Myanmar for a deposit of $5m with the SMED Bank in 2018. They are also accused of withdrawing $1.4 million from the SMED Bank account a week after the military junta takeover of Myanmar in February. The junta has also seized OSF accounts in private banks of Myanmar, a collective sum of around $3.81 million.