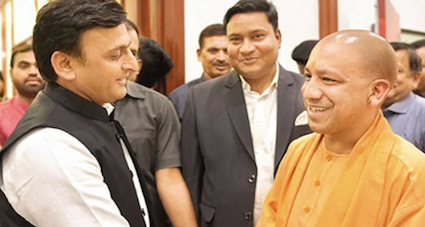 Uttar Pradesh chief minister Yogi Adityanath dismissed the supposition that an Mahagathbandhan would spoil BJP’s chances of retaining the State in the coming assembly polls in February next.

“In 2017, there was a coalition of two boys and in 2019 there was a Mahagathbandhan and we have seen the results. It is common that those who are of one thought – dynastic, corrupt, mafia, will come together. People know this and has decided what answer to give them. What happened in 2014, 2017, 2019 will repeat in 2022, voting for the facilities provided by Centre and Uttar Pradesh govt,” he said.

Yogi has an impressive majority of 314 seats in the 403-seat assembly.

He added, “These dynastic people have always kept people bereft of progress. There is no party in UP which has not gotten a chance to rule UP. Congress got the longest time to rule UP, but what did they do? What does SP mean? It means corruption, riots, crimes against women, gundaraj, nepotism, dynasty. The same is the case with BSP. It is only BJP which has provided progress in UP”.

Samajwadi Party chief Akhilesh Yadav has said that SP would combine only with smaller political parties in the 2022 assembly polls. He is presently holding talks with Mahan Dal, NCP, SBSP etc.

Mayawati has already declared that her party would fight polls alone in UP and Uttarakhand while allying only with Akali Dal in Punjab. Congress meanwhile is looking to go it alone.

When asked about SP’s touted Panchayat poll win, Adityanath dismissed it as a BJP loss. Pointing out that polls were not contested on party symbols, he said that BJP has performed exceptionally well.

He also stated that on an overall level, BJP’s zila chief and block panchayat chiefs had won.

BJP & Apna Dal emerged victorious on 67 of the 75 seats while SP managed to secure only 6 seats in zila panchayat chiefs.

“Panchayat polls are not contested on symbols. SP has not won. The polls are localised and every party’s 4-5 members have contested. Hence it is possible that many members from one party have won. If you see the overall result, in panchayat and block panchayat polls – it was BJP which won,” he said.