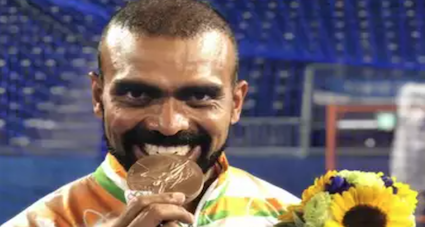 Indian Hockey team goalkeeper PR Sreejesh who had put his performance beyond the scope of any objective discussion, in a bizarre move, was given a reward of dhoti and shirt worth approximately Rs 1,000 as a token of appreciation for winning a bronze medal in the Olympics by the handloom department of Kerala government, as per a report.

After the brilliant win, many state governments announced rewards for sportspersons by announcing cash prizes and other rewards, including employment, land, etc., as a commendation for their achievement at the highest stage.

While the players from Haryana and Madhya Pradesh in the national men’s hockey team will be given jobs and funds, the Minister of Sports & Youth Services in Punjab, Rana Gurmit S Sodhi on Thursday announced a cash award of Rs 1 crore each for players from state.

However, Kerala government’s Handloom Department rewarded Sreejesh, the senior-most player in the team with a pair of dhoti and shirt.

It must also be noted that Pinarayi Vijayan government hasn’t announced any reward for PR Sreejesh.