Stalin’s son-in-law raided by IT; Cash movement the cause: Report 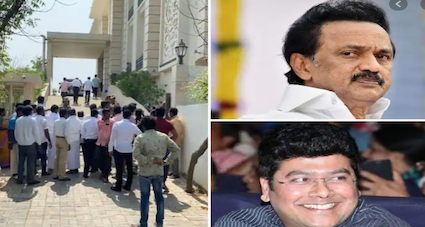 The political landscape of Tamil Nadu was rocked days ahead of its assembly polling on Friday when DMK chief MK Stalin’s son-in-law, Sabarseesan, faced Income-Tax raids at four places in Chennai.

One of the places being searched is a home in Neelangarai just outside Chennai, where Stalin’s daughter Senthamarai lives with Sabareesan.

NDTV was told by Tax department sources that there were inputs on the movement of cash related to the election campaign.

The son-in-law of MK Stalin runs several businesses and is seen as as working behind the curtains for the DMK. He also runs a digital firm, OMG, which handles IT wing activities of the DMK.

DMK leader and supporters have gathered at Sabareesan’s home as a show of support.

This is second such raid on men connected with the DMK. Last month, one of its leader EV Velu was raided at his premises in Tiruvannamalai and Chennai. There were also searches at 10 other locations.

Velu has been fielded by the DMK from The Tiruvannamalai and is seeking re-election from the constituency.

Officials claimed a large amount of cash was seized from the politician.

Ruling All India Anna Dravida Munnetra Kazhagam (AIADMK) is contesting the poll in a pre-poll alliance with the Bharatiya Janata Party (BJP) and the Paattali Makkal Katchi (PMK).

The 234-members Tamil Nadu assembly elections will be held in a single phase on April 6 and the counting of votes will be done on May 2.