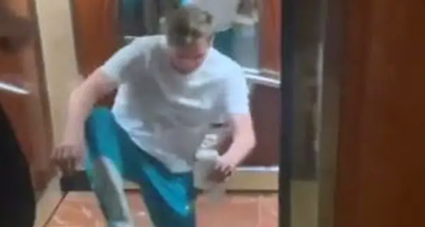 Australia’s star batsman Steve Smith was trapped in a lift for almost an hour in Australia’s team hotel in Melbourne where the home team smashed England to win the Test inside three days.

Smith began asking for help on social media and then got engaged with his fans through a series of Instagram stories.

“I’m on my floor, I’m staying on this level but the doors won’t open,” Smith said in his first Instagram story.

“Out of service up there apparently. I’ve tried to get the door open; I’ve got this side open, Marnus (Labuschagne) is on the other side trying to open that to not much avail.

“Not quite the evening I had planned, let’s be honest.”

Despite his failed attempts to rescue Smith, Labuschagne did manage to pass on what looked like chocolate buttons through a small gap between the lift’s doors.

When a technician finally succeeded in opening the door, Smith came out of it to a round of applause from his Australian teammates.

“Safely back in the room; finally, out of the lift. That certainly was an experience; 55 minutes I will probably never get back,” he said.