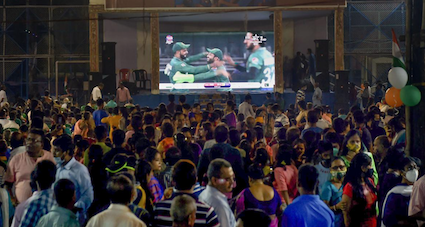 The Jammu and Kashmir administration has registered FIRs against the students of Sher E Kashmir Institute of Medical Sciences (SKIMS) in Srinagar for celebrating Pakistan’s victory against India in the T20 World Cup and are booked under the UAPA (Unlawful Activities Prevention Act) and other relevant sections of the Indian Penal Code.

The police have also filed an FIR (under no. 71/2021) under section 13 of the UAPA at the police station, Karan Nagar, against the students residing at the hostel in Government Medical College (GMC) in Karan Nagar,  “who were crying and dancing last night evening after Pakistan won the World Cup T20 match against India”.

“The FIRs have been registered in Soura and Karan Nagar Police Stations of Srinagar city under sections 13 of Unlawful Activities (Prevention) Act and 505 of the Indian Penal Code. Our probe is currently underway. We will set an example through this case,” a senior officer of J&K Police informed.

The massive development came after multiple videos of GMC and SKIMS college had gone viral in which some students could be seen chanting slogans against India and in praise of Pakistan. The ruckus took place even as Home Minister Amit Shah was on his three-day visit to Jammu & Kashmir, the very first after the abrogation of Article 370 from the erstwhile state.

In the videos, people, purportedly students, were seen singing the Pakistan national anthem.

One of the videos also showed how students in these colleges were found celebrating, cheering, and dancing joyfully after India’s defeat.

The PDP chief also brought in the issue of Abrogation of Article 370 and 35 A, and said, “One hasn’t forgotten how many celebrated by distributing sweets when J&K was dismembered & stripped of special status.”

Attacking Mufti for her tweet, Kashmiri Pandit and activist Lalit Ambardar said, “I am not surprised to see such statement coming from Mehbooba Mufti and company. They are on ground face of the Pakistani establishment in Kashmir. Every time she exposes herself and shows her fidelity to her masters in Pakistan.”