Students in saffron in Karnataka are aghast at Hijab row 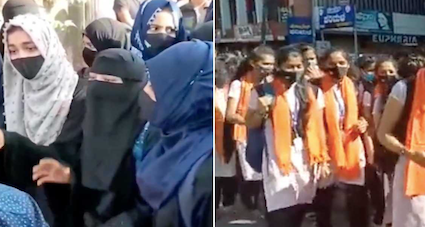 As not just Hindu boys but even girls are flaunting their saffron shawls around the schools in Karnataka where the Hijab Row is inflamed, while the Karnataka High Court deliberates on the matter,  it seems we are in for a prolonged confrontation.

“Wearing a hijab will lead to discrimination between students; we do not like it. When we sit together in class, there should be a feeling of equality. We are all friends. We do not need to get into any discrimination that one is Muslim and the other is not. Till today, we did not even know that some of these girls are Muslims. All of a sudden, they have started wearing hijab,” said a Hindu student.

Interestingly, many a Muslim girls who claim to be fighting for Hijabs turn up at the school gates in full-black burqas.

The Karnataka’s education minister BC Nagesh blamed Social Democratic Party of India (SDPI), the political arm of the PFI, for instigating the protest.

It’s also out in open that Campus Front of India (CFI)—the student wing of Popular Front of India and banned radical terror outfit Jamaat-e-Islam Hind exhorted the Muslim students to whip up the Hijab controversy in Karnataka.