Stunning video: Dhoni talks to himself; when it all began 16 years ago! 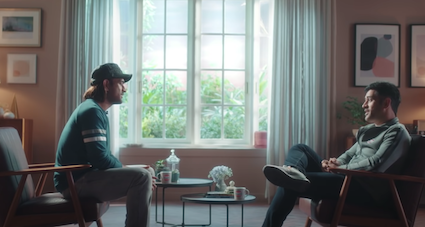 On the 10th anniversary of India’s historic World Cup triumph in 2011 World Cup, Mahendra Singh Dhoni- the not so usual captain, took us back to his younger self and gave us a glimpse of his 16-year-long journey in international cricket.

Gulf Oil India has released an ad in which we see MS Dhoni conversing with himself. A video shared by his IPL franchise Chennai Super Kings on their social media accounts.

“Thala the host and the Guest! A one of it’s kind conversation as @msdhoni from 2021 meets himself from 2005 and tells him about the secrets behind his consistency.”

The video shows a nervous MS Dhoni of 2005 with long hair and a cheeky smile, having a chat with MS Dhoni of 2021, with a more mature look, but the same smile.

After getting his mic set up nicely, the Dhoni of today heaped his younger self on an amazing first year of international cricket, which included a knock of 183 not out against Sri Lanka in Jaipur, which still remains the highest individual score by a wicketkeeper in ODIs.

The best part comes when the young Mahi curiously asks about the favourite innings that the former Indian skipper played in his illustrious career. The 39-year-old responds without hesitation, “World Cup finals. The joy of finishing the match was something else.” While the young Mahi is delighted to know that India won the world cup in 2011, the experienced cricketer praises the youngster and says, “Your hard-work is what made that innings possible.”

Adding to the piece of advise, the retired MSD also asks the 24-year-old to make a sacrifice of leaving butter chicken, soft drinks and milk shakes for a consistent, disciplined and successful career ahead.

The conversion shortly shifted to one of Dhoni’s biggest passions, bikes and when the younger Dhoni asked, “Have you quit all your favourite things just for the sake of consistency and discipline?”

He replied, “No, not really I’ll never quit biking. I have 80 bikes now, all of them your favourite, and our first too.”

Under Dhoni’s leadership, India lifted the 2011 World Cup trophy. The then Indian skipper had played an exceptional knock in the finals of the mega event to see the hosts home.

Mahi took to Instagram and announced his international retirement on August 15, 2020, i.e. on the occasion of India’s 73rd Independence Day.

Both MS Dhoni and CSK will look to bury the failure of last season when they kick-off their IPL 2021 campaign with the match against Delhi Capitals on April 10.