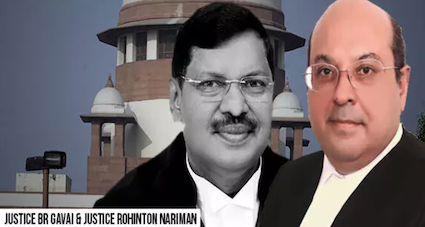 The apex court took a different view than “paramount concern for lives” it had exhibited on Kanwar Yatra on Yogi Adityanath’s Uttar Pradesh in a suo motu action, forcing the cancellation of even a symbolic yatra but in case of Pinarayi Vijayan’s Kerala, it has not done any such sort of thing.

What the Supreme Court has done is to issue some bland admonishments which in essence mean nothing. It said: “Alarming state of affairs to give in to pressure tactics. Pressure hood of any manner cannot infringe upon the most precious right of right to life. If any untoward incident takes place due to this relaxation, public cantering to our notice and action would be taken accordingly,” said the two-judge bench of Justice RF Nariman and BR Gavai who, incidentally, are the same honourables who were bristling with anger at the very thought of Kanwar Yatra only a few hours ago.

Kerala continues to reel under the onslaught of Covid-19 pandemic, reporting 13,206 cases in the last 24 hours which compares abnormally high to Uttar Pradesh’s 102 cases. There is no match in the population of the two states either. Kerala suffered 58 deaths to Uttar Pradesh’s 9 casualties. It’s positive rate continues to be in alarming 10% and above the marker.

Yet, Kerala has been allowed while Uttar Pradesh has been denied which would please Muslims in Kerala but upset Hindus in Uttar Pradesh and the ripple would be felt in two communities across the country.

The Supreme Court, in its wisdom, might claim that its hands were forced this late in the day but the truth is the matter was with them since Sunday and important calls have been taken in the past, irrespective of day or night, weekend or working days.

On Monday, the apex court had asked the Kerala government to file its response on the plea against the three-day relaxation (July 19,20,21) announced by the Pinarayi Vijayan government.

When Senior Lawyer Vikas Singh, appearing for the petitioner, asked the court to pass some orders as today was the last day of relaxation, Justice Nariman said, “There is no point. The horse has already bolted. We are not quashing the notification.”

The court had last Friday cited the fundamental right to life to order the Uttar Pradesh government to stop the annual Hindu congregation, Kanwar Yatra, a matter of faith for millions.

Kanwar Yatra had been postponed last year too due to Covid-19 pandemic.

An example of how Social Media is reacting to the Supreme Court’s ruling on Bakra-Eid relaxations in Kerala.

“It is not correct. Petitioner can check how many died because of this decision AND THEN he can approach us. We will offer our condolences and Stictly order Modi Govt to pay compensation. Now go and eat the Goat”

Only last week, the Chief Justice of India N V Ramana had said that people look up to us (judiciary) for justice. But this present one looks a bad evidence to back that claim.

The Indian Medical Association had on Sunday warned the Kerala government against easing the restrictions because of the “inevitable, impending third wave”.

The Maha Vikas Aghadi government, made up of Shiv Sena, NCP and Congress, is set to inaugurate the “Tipu Sultan Maidan” in Mumbai on...

Biden calls a Fox News reporter “What a stupid son of a b..tch”

“Where was Shiv Sena in Ram Janmabhoomi campaign?…Challenge them if Sonia , Rahul could tweet on Balasaheb”