Surya and Owaisi take a dig at each other: KCR’s daughter joins the verbal duel 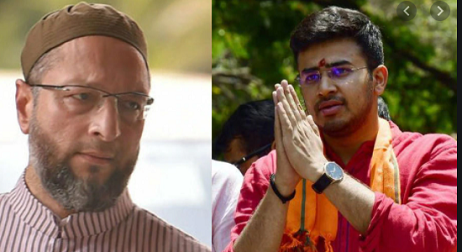 Surya said so while campaigning for the party in the Greater Hyderabad Municipal Corporation (GHMC) elections on Monday.

The elections are due on December 1. There are 150 wards in the corporation.

It ticked off both, the ruling Telangana Rashtra Samithi (TRS) and Owaisi.

“People of Hyderabad care only about development?…what they have done for Hyderabad? How much flood relief have they provided in the city,” asked Kalvakuntla Kavitha, daughter of chief minister K Chandrasekhar Rao and herself a MLC.

Owaisi, in reply, said the BJP leader wants to rename Hyderabad as Bhagyanagar.

“Why are you behind me, why are you trying to provoke me? If you are saying that there are 30,000 Rohingyas, then what is Amit Shah doing?

“If BJP is honest, then give me a list of names of at least 1000 Rohingyas till tomorrow evening.”

Owaisi has also clarified that there wouldn’t be any alliance with TRS in the upcoming polls.