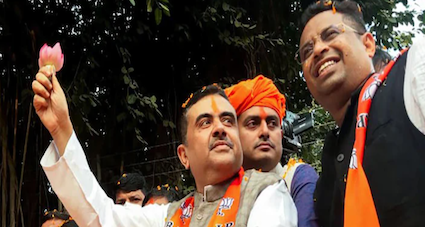 The convoy of BJP leader Suvendu Adhikari was attacked in Nandigram on the day of polls on Thursday afternoon.

Though Adhikari, who is contesting the polls from Nandigram this year, was left unhurt, a media vehicle in the convoy got damaged in the incident

“These are work of Pakistanis, ‘Jay Bangla’ is a slogan from Bangladesh. There are voters from a particular community at that booth who are doing this,” Adhikari said after the incident, as reported by news agency ANI.

This was also the second incident of violence from Nandigram on Thursday. Earlier in the day, a BJP worker — Uday Dubey — was found dead at his residence in Nandigram’s Bhekutia.

the BJP has accused the TMC, saying the party worker was under pressure from the ruling party for his support to Suvendu Adhikari and Mithun Chakraborty during a roadshow.

There are also reports filtering in about an alleged attack on the convoy of BJP candidate Pritishranjan Konar’s convoy, who is party’s candidate from Keshpur in West Midnapore.

(NewsBred had mentioned it yesterday itself of Nandigram and Keshpur as areas volatile to violence).

Earlier today, Suvendu Adhikari rode a motorcycle to the Nandanayak Bar Primary School to cast his vote in Nandigram for the first time. Minutes after voting, Suvendu Adhikari told media outlets that all of Nandigram had come out to vote in favour of the BJP.

“I have a very old relationship with the people of the area,” Suvendu Adhikari was quoted as saying.

Voting is underway for 30 assembly constituencies in Bengal, including Nandigram where the BJP has pitted Suvendu Adhikari against CM Mamata Banerjee.

Given the volatile nature of the constituency and West Bengal’s history of political violence, the Election Commission has deployed at least 22 companies of central forces in constituencies where voting is underway in the second phase.