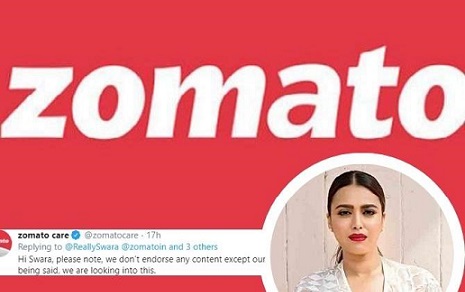 Swara Bhaskar seems to have a way with creating unseemly controversies, with her latest one involving food delivery company Zomato. In a Tweet, Swara demanded that Zomato stop advertising with Republic Bharat as she termed it as “hate espousing”.

Zomato responded: Hi Swara, please note, we don’t endorse any content except our own. That being said, we are looking into it. This seems to have triggered an outrage among many users who then went ballistic after Swara as also Zomato.

Swara claimed to be a regular customer of Zomato and said that she was not comfortable with her money “even indirectly funding this kind of communal bigoted hate”.

Zomato responded to Swara’s message, and replied that it promoted nobody

She posted the comment as she quoted from a Twitter handle which shared a clip of Republic Bharat’s debate on Love Jihad, terming it as “hate speech”.

Her message evoked a strong reaction from other users of the app-based food delivery platform. One user wrote (to Zomato as also Swara): Before doing anything woke do remember that Swara alone won’t buy all the food you have to sell. Another user was direct and straight to the point as he said: You choose Swara, we choose Swiggy. Deal.

Another user @Sootradhar wrote: Hello Zomato … If you succumb to fascism of @ReallySwara then you lose 1000 customers from my area in Mumbai.

Many users of Zomato App said they have uninstalled the app or cancelled its Gold Subscription. Swati Goel Sharma @swati_gs wrote: For responding to an increase demand by a person who fanned communal passions, deleting Zomato app. Anyway good for health too.

Last year, Zomato was in the midst of a controversy over Halal certification of its food. It drew lots of criticism over “Food has no religion” campaign. Then, going the extra mile to draw a distinction between Halal and non-Halal food items.